Tom Hardy is coming to theaters in May of 2015. In Mad Max: Fury Road, he stars alongside Charlize Theron as Max Rockatansky, the role Mel Gibson originated in 1979.

The 36-year-old actor, who is known for speaking his mind, doesn’t take his success for granted. He knows where he came from, and speaks very candidly about his life.

Here’s what you need to know about the English actor.

1. People Know Him as Bane

He earned the iconic villainous role in The Dark Knight Rises after pitching to director Christopher Nolan.

To play Bane, he gained 30 pounds, and weighing the most he ever did in his life.

He told Comic Book Movie, “I feel heavy. This size is not real. I only feel strong in short stints of times. If I needed to get across the room and throw someone through a door, I could do that, but…as soon as I’m done shooting, I’m dropping the weight.”

2. He Met His Wife on ‘Wuthering Heights’

The couple was playing the classic book couple of Cathy and Heathcliff in an adaptation of Wuthering Heights in 2009. They got engaged the following year.

Although he’s never confirmed their actual nuptials, when he referred to Charlotte Riley as his wife in an interview with Us, the media came to their own conclusion.

He told the magazine:

Well my wife is an actor as well so she sort of gets it. Apart from that, I’m a pain in the ass really. You know what I mean? Like any other boyfriend.

When he was asked what he loves most about Riley, he said, “Aw, she’s pure. She’s just a very kind, pure person.”

“I was a shameful suburban statistic,” he said to Esquire regarding the fact that he drank, did drugs, and got kicked out of school as a teenager.

He was expelled from his boarding school in England for stealing and went on to battle an alcohol and crack cocaine addiction.

According to the Mirror, he checked himself into rehab in 2003, after waking up in a pool of blood and vomit.

Hardy is an ambassador for the charity Prince’s Trust, which helps youth.

In the video above, which he made for the organization, he said:

I’m an addict and an alcoholic, so I have my ups and downs…I want to help other people and I’m really grateful of the things that happened in my life. It could have gone the wrong way.

Now he is totally clean and is candid about his progress.

In an interview with Comic Book Movie, he talked about his life now:

I can’t use, I can’t drink. So that means I can’t go out and dance and be comfortable doing it because I feel stupid and embarrassed. And I’m embarrassed doing karaoke because I haven’t had a beer. You win a few, you lose a few. I can’t have beer, but I can have a fight with Batman. At the end of the day, who’s complaining?

He has a 5-year-old son Louis with former partner Rachael Speed.

I had a child with my ex. We weren’t right together. In my head it was a lot to do with: I must be in a family. Being brave and saying ‘actually I don’t think I’m in the right relationship’ terrified me.

5. His Tattoos Tell His Story

“Every tattoo I have means something to me. Each one is something that I’ve been through in my life or I’ve done or I’ve been,” he told the Global Mail.

At 15 he got his first one, a leprechaun, which pays homage to his mother’s Irish ancestry.

He also got a dragon for his now ex-wife, Sarah Ward, since she was born in the year of the dragon.

“That’s what you call a mistake tattoo,” he said.

Even with all the body art, he doesn’t feel that tough.

I don’t feel very manly. I don’t feel rugged and strong and capable in real life, not how I imagine a man ought to be. So I seek it, to mimic it and maybe understand it, or maybe to draw it into my own reality. 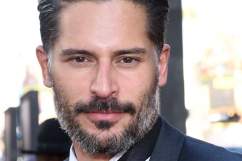