For the opening of the 2014 Tony Awards, host Hugh Jackman starts things off on the red carpet and then hops all the way down into the auditorium, slapping hands along the way. He continues to hop as he gets dressed backstage, greets Sting with a handshake, and jump-ropes with “Rocky”. Finally, he stops jumping when he gets in an elevator with Neil Patrick Harris, but he resumes his hopping as soon as he leaves, passing the cast of “Cabaret”, among others. Clint Eastwood even walks by with a scowl on his face.

Finally, Jackman concludes his opening with a short singing verse.

And we're live on @CBS – the show is getting off to a #bounce with @RealHughJackman hosting! 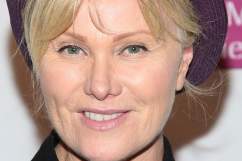