The Tony Awards are tonight. Let’s get you ready for what’s in store with these 5 Fast Facts on everything you can expect to see.

1. Performances Will Be Star-Studded

In addition to the normal “Best Musical” performances and other Broadway acts, there will be several celebrity performers on tonight’s playbill, along with host Hugh Jackman. Sting will be giving a performance for new show “The Last Ship,” Jennifer Hudson will be singing on behalf of “Finding Neverland,” and Neil Patrick Harris will be performing a song from “Hedwig and the Angry Inch.” Patti LaBelle and Gladys Knight will also join Fantasia on stage to perform “After Midnight.”

CBS has released a list of the Tony Awards presenters for this year: 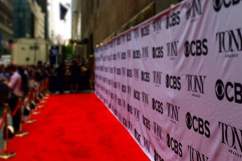 What Time Do the Tony Awards 2014 Start?

CBS, Stage17 TV, and TonyAwards.com will all be offering live stream footage of the Tony Awards. Some will include red carpet arrivals, beginning at 6:00 p.m. EST, while others will be just the actual show. For more information on the show’s start time and the live stream videos, check out the above link.

4. “Wicked” Will Be Celebrating Its 10th Anniversary

The cast of “Wicked” will return to Radio City Music Hall for the first time since 2004, when they won three Tony Awards. They will take the stage once again for a very special performance to celebrate the show’s 10th anniversary.

5. Four Contenders Are Competing for Best Musical This Year

At this year’s Tony Awards, the competition for Best Musical consists of “Aladdin,” “After Midnight,” “Beautiful: The Carole King Musical,” and “A Gentleman’s Guide to Love and Murder.”

Read More
Celebrities, Hugh Jackman, Instagram, Tonys
Tune in here for all the information you need on the 2014 Tony Awards.