Tonight is the finale of The Challenge: Free Agents and we’ve got a sneak peek at who could win it all? It’s down to Laurel Stucky, Johnny “Bananas” Devenanzio, Johnny Reilly, Devyn Simone, Zach Nichols, and Nany Gonzalez. This will be a five-stage competition – the first three stages will take place in teams and the last two will be “every man for himself.”

Check out some background info on each of the six finalists below.

Laurel Stucky – Laurel is always the one to beat. She dominates when she’s thrown into the fire, she’s athletic, and she has great strategy. If anyone can win, it’s definitely her.

Johnny Reilly – Reilly will start off in the finale as Laurel’s partner, which should definitely help him. As a rookie, he hopes to win to prove he’s a force to be reckoned with and to gain some respect.

Johnny “Bananas” Devenanzio – “Bananas” is a veteran when it comes to these challenges and he’s dominated before, so there’s a good chance he can do it again.

Devyn Simone – Devyn is a puzzle wiz, so perhaps that will take her far in the challenge … minus the fact that her raft capsizes and puts her way behind. It doesn’t look like Devyn will be taking the win this time.

Zach Nicols – Nicols has a very scary moment on the finale when he freaks out as he’s rock climbing with Laurel. Have a look at the clip below:

But, that’s not Zach’s only horrific moment on the finale. When battling the rapids in white-water rafting, his canoe capsizes and he almost drowns. 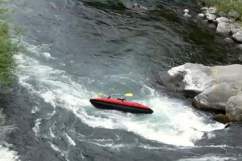 Nany Gonzalez – Nany steals the heart of fellow challenge-goer Cohutta and also ends up making it to the finale. Usually, Nany gets eliminated right before a challenge finale, but this time it’s not the case.

Read More
MTV, Reality TV
In the finale of "The Challenge: Free Agents," there are some dangerous, near-death moments ... Who takes the big win?