Marvel Television will present its new series Marvel’s Agent Carter at the 2014 San Diego Comic-Con along with Marvel’s Agents of S.H.I.E.L.D. which heads into its second season this fall. The show’s stars including Clark Gregg and Ming-Na Wen from S.H.I.E.L.D. and Hayley Atwell from Carter will be in attendance and signing autographs during the convention.

Find out when and where to see your favorite S.H.I.E.L.D. agents and if Agents of S.H.I.E.L.D. season two’s events lead directly to Avengers: Age of Ultron.

Marvel's #AgentCarter is headed to @Comic_Con! Join us on 7/25 to learn about the upcoming TV series. Details: http://t.co/3to3gQEMwj #SDCC

Marvel’s Head of Television Jeph Loeb will moderate the panel for his two series. The Q&A with the casts will take place in Ballroom 20 on Friday, July 25 from 3 p.m. to 4 p.m.

Coulson still lives! Clark Gregg will join cast mates Ming-Na Wen, Chloe Bennet, Brett Dalton, Iain de Caestecker and Elizabeth Henstridge for their second trip to the con. They will tease upcoming story lines for season two and hopefully give some understanding to Phil Coulson’s strange writings at the end of the season one finale. On Saturday, the cast will hold an autograph session from 10 p.m. to 11 a.m. at the Marvel Booth (#2329) on the convention floor.

All aboard the #AgentsofSHIELD train! RT @cofphoto @AgentM We're getting ready in San Diego!! #SDCC pic.twitter.com/ijjiuOO3Aa

I can’t be specific about it, but what I can say is we had such a strong set of stories through that huge finale at the end. That triggered up a whole load of story lines we’re reading at the moment, and I have to say I’m loving those scripts.

Watch the Agents of S.H.I.E.L.D. cast at last year’s SDCC in the video above.

2. S.H.I.E.L.D. Rebuilds and Lucy Lawless Joins the Cast in Season 2

Marvel doesn’t trust anyone with spoilers for its big and small screen properties, and neither will Coulson and his team in the upcoming season. When S.H.I.E.L.D. collapsed at the end of Captain America: The Winter Soldier, former agents, included Grant Ward, were revealed to be undercover HYDRA members, the dangerous organization seeking world domination. “He’s in the mix,” executive producer Jeffrey Bell told TV reporters about Ward, who Coulson’s team captured at the end of last season.

As for Coulson’s new position as director of the broken agency, a position bestowed upon him by former Director Nick Fury (see video above), executive producer Maurissa Tancharoen talked about his difficult transition ahead:

What does it mean to be the director of something that’s fallen apart?… As Agent Coulson, I think it was very clear that he was the kind of man to leave no man behind. But now as director, I think we’re going to explore, you know, maybe he has to make tougher decisions, harder calls.

Lucy Lawless will join the cast this season, but Marvel has not revealed the identity of her character or how long she’ll stick around, according to TVGuide.com. Watch her as the Xena, the princess warrior of ancient Greece, in the video above.

Hayley Atwell‘s Agent Carter looked like a one-time character after her potential love interest Captain America woke up 60 years later in present day and left her in the past. Marvel brought her back for a one-shot short film that appeared on the Iron Man 3 (Blu-ray / DVD Combo Pack)

Her story picks up in 1946 where she’s working for the Strategic Scientific Reserve (SSR) and running secret missions for Howard Stark. Dominic Cooper, who played Stark in the first Captain America film, told Zap2It that he “wouldn’t hesitate” reprising his role as Tony Stark’s father:

I would like to do any way possible that Howard Stark can make a return. He’s such a fun character to play, and I really believe that he could make quite an exciting character to watch more of. The flawed entrepreneur, the kind of crazy playboy, from that era is an exciting concept.

Atwell along with the show’s executive producers Tara Butters, Michele Fazekas, Christopher Markus, Stephen McFeely and Louis D’Esposito will talk more about the series that will air during Agents of S.H.I.E.L.D.‘s midseason hiatus. Before the panel, they will sign autographs from 1 p.m. to 2 p.m. at the Marvel Booth (#2329) on the convention floor.

Executive producers for S.H.I.E.L.D. Jed Whedon and Maurissa Tancharoen have not ruled out a possible crossover with their new ABC sibling they told TV reporters on July 15:

The Marvel Cinematic Universe films Guardians of the Galaxy and Avengers: Age of Ultron will bookend the 2014-2015 TV season, but Whedon said it’s fortunate neither one will premiere during the season:

Fortunately there will not be a movie that comes out that destroys SHIELD, so our approach is definitely different this year. In terms of game-changers, that’s hard to beat.

As the events in Captain America 2 spurred the back half of Agents of S.H.I.E.L.D. first season, the TV show may return the favor and set up the action for Avengers 2. Whedon teased TVLine with S.H.I.E.L.D.‘s role in connecting the universe:

Everything is connected, sometimes more so than other times. Obviously Coulson was born out of the films, and we can only hope to have that sort of impact in the other direction.

Season two of S.H.I.E.L.D. will premiere on Sept. 23 at 9 p.m. (ABC pushed the series back one hour). When the show goes on its midseason hiatus, ABC will air new series Marvel’s Agent Carter in its place. 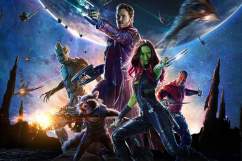 ‘Guardians of the Galaxy’: Top 10 Facts You Need to Know