Now that the trailer for Fifty Shades of Grey was released, it’s safe to say that Jamie Dornan will become the new obsession of women worldwide.

To the chagrin of fans, the Irish actor is taken.

As we await the release of the film on Valentine’s Day, let’s learn more about the woman who stole the actor’s heart.

“I started acting when I was really young so it wasn’t necessarily a decision that I took, it was just something that was happening,” she said in an interview for Hunger TV, shown above.

Her biggest films to date are Quills and Mansfield Park.

She transitioned to music, and performs under the name, “Slow Moving Millie.” You can hear her rendition of The Smith’s “Please, Please, Please, Let Me Get What I Want” here.

In 2011, her version was used in a Christmas commercial for the John Lewis department store chain. She told the Telegraph, “I haven’t been spat at by Smiths fans in the street…I’ve had a few people being furious at me on Twitter, saying, ‘How dare you?’ But I haven’t done anything to the original. I think you’ll find it still exists.”

In the interview with Hunger TV, she talks about her decision to pursue her musical aspirations. “Music has always been really, really important to me. And kind of my biggest passion,” she said.

“And writing is something I’ve always done. it’s just the idea of actually doing it for my job…didn’t occur to me until later than acting,” she continued.

3. She Was Married to Colin Firth

When she was 19, she married the Irish actor on a beach in Tahiti.

Their union lasted for four months, with Firth telling Details, “I had a brief liaison with the notion of permanence.”

According to the Daily Mail, the marriage was “later revealed to not be legally binding.”

4. She Has a Daughter with Jamie

Friendly reminder that Jamie Dornan has a baby daughter :):):):):):) pic.twitter.com/NbnVtf6uhc

The pair announced their engagement in November of 2012. In January, Warner was spotted with her engagement ring on vacation in Miami Beach with Dornan.

In December of 2013, the pair’s rep told Us Weekly that their daughter was born in November, without releasing her name.

5. Her Parents Are Actors

She is an only child of divorced parents.

Her father is Welsh actor and writer Alun Lewis. Her mother is Annette Ekblom who had roles on TV and in a musical.

She even posted this picture of her son-in-law: 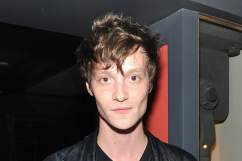