Ready for the Tell All! #Bachelorette #BachelorNation pic.twitter.com/Kne2TMVXXi

On tonight’s episode of The Bachelorette, star Andi Dorfman sits down with all the men she sent home. Tune in here live to see what chaos ensues, who’s upset about their departure, and more …

What's it like to be in a room full of exes? @AndiDorfman finds out TONIGHT on #MenTellAll! https://t.co/TvwGlv18zA

Former Bachelorette Ashley and hubby J.P. kick things off by coming on the show to reveal that they’re pregnant and moving to Miami. Plus, they do a live ultrasound to find out the sex of their baby … 8:05 p.m.

Thank you everyone for all the well wishes! We had so much fun being there at the #MTA! #TheBachelorette

Chris Harrison reveals that he has a copy of the lie detector results that Andi originally tore up … So, which of the contestants lied? 8:16 p.m.

Host Chris Harrison gives us a glimpse into Bachelor in Paradise … It shows Michelle Money crying and Clare Crawley flipping out. The promo was full of tears and anguish. Looks like it will be an action-packed season. Between the new arrivals, the drama, the drunken makeouts, and the betrayals, it seems like every star is miserable. Someone gets taken away in an ambulance and another person gets arrested … Yikes. 8:23 p.m.

And the guys are finally introduced to the crowd. 8:29 p.m.

Marquel talks about when J.J. told him that Andrew made a racist comment. He said that he prayed about it and wanted to address the situation in the right way. 8:35 p.m.

Andrew has denied that he ever made the racist comment. When Chris Harrison shows the footage in question, it can’t be determined what Andrew said exactly. The point that Andrew and the men have are that J.J. never brought up the situation for a few weeks. 8:38 p.m.

After a short commercial break, Marquel is in the hot seat, but J.J. interrupts to say that he felt attacked when the subject about Andrew’s comment came up. He ends up sticking his foot in his mouth and things move back to Marquel. 8:48 p.m.

Chris Harrison reveals that Marquel will be on Bachelor In Paradise and the two talk about how Marquel just couldn’t get out of the friend zone with Andi. And, at the end of his time in the hot seat, Marquel passes out cookies to the crowd. 8:55 p.m.

Marcus reveals that he’s still dealing with the break up from the show. On a side note, there are rumors that Marcus is currently engaged to a fellow cast member from Bachelor In Paradise. Think it’s true? 9:05 p.m.

Chris wishes he had had more time with Andi so he could show her what he could give her in life as far as more about himself and how he shows his love for someone. 9:18 p.m

All of a sudden, a brunette in the crowd interrupts the two Chris’s as they chat and she comes down to the stage to meet Chris Soules. She then asks Chris if he thinks he’ll find the woman of his dreams in Iowa. Then, host Chris Harrison asks the woman if she wants to date Soules and she says “Absolutely.” 9:20 p.m.

During the commercial break, Chris Soules and his admirer from the crowd get a quick speed date and she gives him her phone number. 9:21 p.m.

When Andi comes out, she talks about what a gentleman Chris Soules was and that she couldn’t put him through an overnight date when she didn’t feel that kind of connection with him. As for Marcus, he asks Andi if she felt scared of how open he was. Andi says she wasn’t. 9:30 p.m.

Because Chris Bukowski is in the audience and never got to actually meet Andi since he was turned away at the door, host Chris Harrison creates an awkward moment where the two meet. It’s a couple quick hi’s and then a commercial. 9:34 p.m.

I had an important question for Andi. Let's see if it was edited out or not #MTA

Host Chris Harrison brings up some of the tabloid rumors about Andi, specifically that she was pregnant … but she’s not. 9:40 p.m.

The men who were totally truthful were Brian, Chris, and J.J. This means that Josh, Marcus, and Dylan all lied. 9:41 p.m.

Andi opts to not hear the lies that Josh told. This disappoints everyone. 9:44 p.m.

Contestant Eric Hill who passed away has not been brought up on the show tonight. 9:51 p.m. 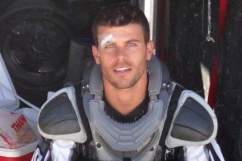