This past week, Marvel showcased the newest individuals to take over the heroic mantles of their two biggest heroes – Captain America and Thor. And now the comic book juggernaut has given some more backstory on these new plans and it’s introduction of a new rendition of Iron Man.

Here’s everything you need to know about Marvel Comics’ fall lineup and how it will impact their expansive universe.

1. Sam Wilson is Taking Over the Mantle of Captain America

On a July 16, 2014 edition of The Colbert Report, Marvel Comics’ Chief Creative Officer Joe Quesada revealed the man who’s will now save the world as Captain America – Sam Wilson aka “The Falcon.” This major change pertains to the comics, but fans will recognize Sam Wilson as Anthony Mackie from Captain America: The Winter Solider.

This move to a new, African American version of the patriotic superhero is due in part to the current storyline revolving around Steve Rogers – Steve Rogers is currently losing his superpowers in a solo run that’s being penned by Rick Remender. This move can be seen as an overall push to pursue more diversity in the world of comics by Marvel.

Contrary to popular belief, this isn’t the 1st time that a Black man combated evil as Captain America. Isaiah Bradley was actually the man to do that, plus he held the mantle of this true American hero before Steve Rogers rose to fame under his mask.

3. Thor is Unworthy of Wielding Mjölnir, Which is Why a Female Thor is Coming Soon

Marvel made another great announcement regarding its other major hero – Thor. The male Thor has been labeled as “Unworthy” and no longer strong enough to wield his famous hammer. This somewhat weakened and beaten down version of Thor now wield his familiar ax Jarnborn, but he no longer has access to his elemental powers.

He can be seen sporting a metal arm now, due to this battle with the son of Apocalypse in a recent comic. He utilizes the metal arm of the Destroyer to replace the human limb he once had.

Now that we’ve seen the Unworthy Thor, it’s time to get a an explanation on the female version who will replace him. Marvel Comics released the press release statement about her, which can be read below:

Marvel is excited to announce an all-new era for the God of Thunder in brand new series, THOR, written by Jason Aaron (Thor: God of Thunder, Original Sin) complimented with art from Russell Dauterman (Cyclops).

This October, Marvel Comics evolves once again in one of the most shocking and exciting changes ever to shake one of Marvel’s “big three” – Captain American, Iron Man and Thor – Marvel Comics will be introducing an all-new THOR, GOD OF THUNDER. No longer is the classic male hero able to hold the mighty hammer, Mjölnir, a brand new female hero will emerge will who will be worthy of the name THOR. Who is she? Where did she come from and what is her connection to Asgard and the Marvel Universe?

“The inscription on Thor’s hammer reads ‘Whosoever holds this hammer, if HE be worthy, shall possess the power of Thor.’ Well it’s time to update that inscription,” says Marvel editor Wil Moss. “The new Thor continues Marvel’s proud tradition of strong female characters like Captain Marvel, Storm, Black Widow and more. And this new Thor isn’t a temporary female substitute – she’s now the one and only Thor, and she is worthy!”

THOR is the latest in the ever-growing and long list of female-centric titles that continues to invite new readers into the Marvel Universe. This female THOR is the 8th title to feature a lead female protagonist and aims to speak directly to an audience that long was not the target for Super Hero comic books in America: women and girls.

4. The Superior Iron Man is Also Coming to the Marvel Universe

Writer Tom Taylor and artist Yildiray Cinar are ready to debut a new look and plot direction for Iron Man. This fall, the comic book world will make way for Superior Iron Man #1, which sees Tony Stark donning a set of new silver armor. He’ll also be making his over from his home of New York to San Francisco.

Marvel Comics Editor-in-Chief Axel Alonso spoke to Entertainment Weekly and commented on this new Iron Man and his newfound personality:

5. Marvel is Making This New Iron Man a Part of the Avengers NOW! Initiative 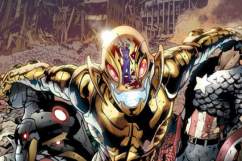