Dallas Parks, a Texas Playboy model, has sparked an online frenzy among NFL and Playboy fans alike after she posted a pic with Johnny Manziel on her Instagram page. The model and Cleveland Browns QB were out partying in Las Vegas together. It’s not totally clear yet if the two are madly in love or if was just the bonding of two Texans out on the town. As the Dallas News points out, Manziel was pictured in April with model Kyndal Kyaire.

Here’s what you need to know about Manziel’s new (possible) squeeze:

1. She Went to the University of Texas

According to Parks’ Facebook page, she attended the University of Texas at Austin and is a graduate of New Braunfels High School in New Braunfels, Texas.

On her official profile with Playboy, Parks states:

I’ve lived in England, Germany, traveled the world to so many places and fell in love! I don’t ever want to stop! I take pride in how I look & that’s all that really matters.

In the profile, it adds that Parks competed in Playboy’s “Miss Social” competition in Cancun in December 2013.

3. She Used to Work at a Swanky Bar in Austin

On her Facebook page, Parks writes and posts pictures of herself working at a hip Austin bar called Rio. While there she provided bottle service to VIPs. The bar describes itself as:

An unprecedented nightlife concept on West 6th in Austin.

4. One of Her Turn-Offs Is ‘Boys With No Manners’

On her official Playboy profile, Parks says that her turn-offs are “close minded people, gossipers, boys with no manners.” Maybe Manziel will have to improve his behavior to keep Parks around.

On the other hand, Parks says that she likes, “Gentlemen who still open car door for ladies, kisses on the neck, being treated like a princess <3." She then discusses her ideal date:

on the beach with someone I truly love and care about just rolling around being silly, getting wet & sandy. :)

5. Johnny Manziel Has Had a Busy Summer

Well busy summer/spring. He’s already been pictured hanging out with Justin Bieber and Floyd Mayweather. Not to mention, performing bartending duties in Austin, this was all after he was pictured making out with Kyndal Kyaire at a Texas Rangers game. Just in case Manziel cares, pre-season training starts for the Browns on July 26. 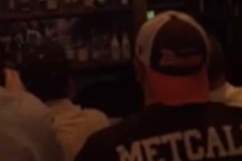