David is a talented chef who needs to shed a lot of weight … and guilt. Read on for the facts on tonight’s Extreme Weight Loss participant David, who weighs in at 413 pounds.

1. David Feels Responsibility In the Deaths of His Siblings

Before David’s graduation, he had “taken off” and his two brothers got into their parents gun cabinet. Benjamin and Christopher were playing cops and robbers and the youngest brother was killed. Six weeks later, David’s little sister passed away as well. She suffered from seizures and David hadn’t given her her medicine the night before, so he blames himself for her death. Though David attempted CPR, his sister was not able to be saved. David’s guilt has led to excessive eating and his weight has gotten out of control.

2. He Wants to Be Better For His Girlfriend Kayla

Kayla and David have been dating for almost 7 years, but David’s insecurities sometimes get in the way. He feels his appearance may embarrass Kayla. Kayla is tired of missing out on things with David, so she hopes that this transformation will change him. David wants to propose to Kayla, which he does at tonight’s big reveal. As David steps on the scale, trainer Chris Howell brings up girlfriend Kayla to stand by David’s side. David says he has to empty his pockets and pulls out the engagement ring. He gets down on one knee and tearfully proposes to Kayla. It was an Extreme Weight Loss first.

David created a quaint, yet delicious pop-up shop known as The Rusty Spoon and it received rave reviews. Fooducated writes:

The Rusty Spoon concept, Chef Rushing explained, is a celebration of tradition … Chef Rushing set the scene perfectly. One long table stretched across the demonstration kitchen. A rustic plank of wood collected by Rushing stretched across the table. Our menus were attached to thick block of woods with nails crafted by Rushing himself. Our silverware was wrapped in towels that were held together by old bent spoons (also collected by Rushing).

As for the food, the diner wrote:

Every time I took a bite of one thing, three other items magically appeared. There was bread with locally made butter. Marinated olives. Artisan salami. Celery root covered in farm egg mayo. Chicken liver mousse. Cauliflower and white bean hummus. Lamb sausage with an apricot and mint spread. Everything was delicious.

David has a long resume of achievements in the culinary industry and currently works at Ibby’s in St. Louis, Missouri. His bio on the restaurant site gives some background on how he came to be the chef he is today:

Joining in August of 2009, Rushing comes with 14 years of experience in the kitchen … He spent five years at the Brasserie studying under a former chef of the White House while he worked his way up to become the head chef. He previously worked in Florida for a private hotel, and in California as an executive chef of a resort. David enjoys giving his time and talent to charities such as the March of Dimes and James Beard Foundation … He also designs specials and assists with Ibby’s menu development.

Some of the dishes that look truly delicious on the menu include the Raincrow Ranch Grass-fed Ribeye, the French Onion Soup with Foccacia Croutons, Warm Sweet Potato Pound Cake, and the Bananas Foster.

5. The UFC Lends a Hand to Help David

On tonight’s episode, David meets UFC founder Dana White and champion fighters Vitor Belfort, Ronda Rousey and Urijah Faber to help him on his journey. With the help of MMA fighting and the UFC, David will learn how to fight back against his past. David wants to compete in his first MMA fight, but getting into shape is difficult along the way. In the first two weeks, David becomes quite sick and is taken to the hospital for fear that he’s having a heart attack. Then, David tears a ligament in his ankle … What else can go wrong? 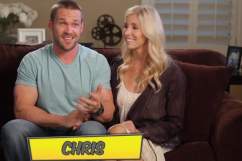