Mega songstress Katy Perry is having a dark day as it’s been announced by TMZ that her song may have ripped off another that was made five years ago.

Here’s what you need to know about the lawsuit against Perry and her record label.

Watch the videos below to compare Perry’s song to the Christian tune from the singer Flame.

On Flame’s site, he describes his musical mission as “Christ-centered.”

“We will not by any means, according to God’s grace, compromise our sure allegiance to the inerrancy of the Holy Bible as we engage culture and the arts,” the site continues.

Academy Awards winning rapper Juicy J named as part of the suit since he sang on the track.

The artist was surprised he was even asked to collaborate with Perry.

He told Billboard, “The producer, Dr. Luke, called me up and was like, ‘Yo, Katy Perry wants to feature you on a song.’ I was like, ‘Are you serious?'”

4. ‘Dark Horse’s’ Lyrics Are Dark, Unlike the Christian Song

Perry’s song suggests a kind of supernatural power she will use against her man:

The singer herself admitted to the witch-centric wording, telling MTV:

…the lyrics are kind of witchy and dark, as if I was a witch warning this man not to fall in love with me, and if you do know I’m going to be your last.

She also talked about it being a “witchy, spell-y kind of black magic-y idea.”

The Christian singer’s lyrics sing quite another tune, literally.

The entire song is dedicated to the life of Jesus Christ, and how people should follow his teachings:

One day we gon’ be out man, like three strikes
And home son like a homerun CHRIST
IS – KING – LION – LAMB – GOD – MAN – SIN CONQUEROR – GRAVE CONQUEROR – SATAN CONQURER
Can take a sinner, atheist sinner to God conscience
Can take nothing 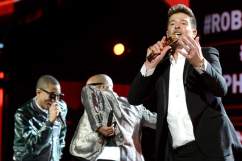 The Top 5 Pop Music Collaborations of 2013

Read More
5 Fast Facts, Juicy J, Katy Perry, Music, Religion
Katy Perry's hit Dark Horse is under scrutiny for ripping off a Christian song by Flame. He is suing her and her record label for copyright infringement.