TV personality and chef Gordon Ramsay has made quite an impression with FOX. The host, who has endured his fair share of time in the limelight after different alleged affairs and lies, will return Monday nights on FOX with MasterChef followed by the second season of Hotel Hell .

1. He Lied About Playing Professional Soccer

Ramsay has received criticism from the media for embellishing his soccer career in order to boost his celebrity profile. According to the Daily Mail, he claimed to have played with the Glasgow Rangers on their first team for three years before a knee injury forced him to retire from the sport. In 2002, the TV personality claimed he was spotted by Rangers coaches during his time on the Oxford United’s youth team.

That’s how it started: Going up back to Glasgow and summer holidays and then eventually signing.

In 2009, though, a spokesman for the Rangers came out and said everything Ramsay had been telling the press was a lie.

Ramsay was a triallist. He trained with us for a few months but then got injured.

The same spokesman denied Ramsay ever having played on the first team. The only evidence he was actually able to produce proving he played with the Rangers was a photo of the team. Looking closer at the photo’s caption, however, it’s clear that every other player’s full name is featured while Ramsay is labeled as a ‘trialist.’

2. He Had an Affair With a Hotel Owner’s Wife

When he was in his 20s, Ramsay worked as a commis chef at the Wroxton House Hotel. An affair with the hotel owner’s wife, however, forced him to drop the job and move to London, where he worked at a series of restaurants, according to Prezi.

Gordon Ramsey at Royal Hospital Road opened in 1998. In 2001, the restaurant received its first Michelin star, subsequently persuading him to open up his next restaurant, Petrus, where a group of six bankers once spent over $7,500 on wine in one sitting.

Ramsay continued to open up restaurants all over the world in prestigious locations like Tokyo and Dubai. In 2006, he received an OBE for services to the hospitality industry.

In 2004, Ramsay made his series debut with Kitchen Nightmares. The show was a huge success, but Ramsay announced it would not be renewed for any more season in June 2014. Since then, it has been reported by Grub Street that over 60% of the 77 restaurants that Ramsay worked with over the years have closed.

4. PETA Accused Him of Having Double Standards

In 2010, Ramsay was in the news because a foie gras factory that supplied food to his restaurants was force feeding their ducks grain through tubes three times a day. PETA spoke out about the factory, saying its practices were unfair and cruel to animals.

We hope Gordon Ramsay and other chefs will swear off this particular ‘f-word’ – foie gras – for good.

Ramsay married Tana Hutcheson in 1996. The two have four children together.

In 2008, a woman named Sarah Symonds boasted to tabloids that she had been having an affair with Ramsay for the past ten years. Symonds, who is a former ‘professional mistress’, has previously claimed to have an affair with bestselling author Jeffrey Archer. In December 2011, the Daily Mail reported her saying:

I take full responsibility for my past. But having affairs is like a drug – you’re always desperate for your next fix of the guy. It can destroy you. I’ve felt so low I’ve been suicidal.

She claims to have been extremely saddened by how her affair with Ramsay turned out, and promised she’d never see a married man again. Ramsay denied all the allegations, saying he was more likely to have an affair with Delia. 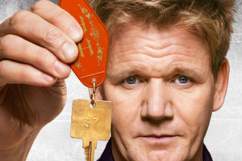