CMT's Party Down South – Ep 207 SneakGet a sneak peek of Ep 207. Don't miss this all NEW episode Thursday (July 17) at 10/9c, only on CMT. SUBSCRIBE to CMT: http://at.cmt.com/uXvwn About Party Down South: From the producers of Jersey Shore comes the most outrageous Party Down South. Follow eight young adults for one wild summer of extreme fun. Their summer…2014-07-11T17:46:40.000Z

On tonight’s episode of Party Down South, we get to see how Taylor “Lil Bit” Wright’s boyfriend’s house visit goes over … Check out all the facts on Grant Meredith, Lil Bit, and the love triangle with Ryan “Daddy” Richards.

1. We Meet Grant In the First Episode of the New Season

On the first episode of season 2 for Party Down South, we meet Lil Bit’s new boyfriend Grant. Around the 2:00 mark in the above video, we meet Grant for the first time. Check it out. 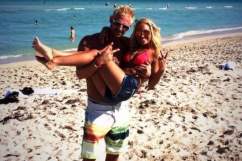 When housemate Daddy hears that Lil Bit has a boyfriend, he is shocked and begins to rebel against Lil Bit. Daddy continuously gets drunk and angry, outing Lil Bit to the rest of the house. The story is that the two had a drunken hookup not long before the new season started. Daddy reveals that he and Lil Bit talk all the time, but he never heard anything about her having a boyfriend. This makes for a lot of fights in the house until Lil Bit finally admits to cheating on Grant with Daddy. Unfortunately, Daddy has feelings for Lil Bit, while she’s crazy about her boyfriend.

3. Daddy Starts Trouble With Grant When He Visits

After some consideration, Lil Bit decided she wanted to have Grant visit her, though she hasn’t told him about her hook up with Daddy. When Daddy has a one-on-one with Grant, Grant reveals he loves Lil Bit. Grant and Daddy sit down after Lil Bit has revealed some details on what happened between her and Daddy, but when things start to get a bit intense, a fight with Lyle and a random guy at the bar breaks out.

4. The Rest of the Cast Aren’t Exactly Team Grant

When Grant shows up, the rest of the cast feel for Daddy’s situation and aren’t exactly fans of Grant. Grant isn’t the kind of guy they pictured for Lil Bit apparently … Well, except for Tiffany who’s on board with Lil Bit’s relationship.

5. The Two May Not Be Together Anymore

Lil Bit’s boyfriend Grant is a singer and she met him downtown from where she lives. It takes Lil Bit’s leaving for the show to realize she was really crazy about Grant. Her only hope at the start of the season was that she wasn’t going to mess things up with him.

Well, it looks like the two may have not been able to work things out because just this week, Lil Bit was spotted in some cozy photos with a guy named Layton Jones … but hey, they could just be friends, right?