Marvel Studios has been in the news a lot lately. They’ve listed the dates for several upcoming films, teased fans with the next phase of superhero films and shown off some footage of it next season of TV shows. Come August 1, 2014, the Guardians of the Galaxy are going to hut the big screen and hopefully earn the mainstream spotlight they so richly deserve.

There’s a lot of news and little known facts surrounding this space-faring Marvel Comics adventure. You’ll walk into the theater knowing everything there is to know about the film’s character origins, cast, soundtrack and more.

Here’s the top 10 facts you need to know about this summer’s next comic book blockbuster, Guardians of the Galaxy!

1. The Film’s Guardians Includes Members From the 2008 Team

There are two different version of Marvel’s Guardians of the Galaxy. The 1969 edition of the team is the original iteration, which included the members Major Vance Astro/Vance Astrovik, Martinex T’Naga, Captain Charlie-27 and Yondu Udonta.

The 2014 film is based on the current edition of the team, which was rebooted and introduced in 2008. The 2008 gathering of the Guardians included members such as Star-Lord, Rocket Raccoon, Quasar, Adam Warlock, Gamora, Drax the Destroyer and Groot.

2. This Film is a Part of Marvel Studios Phase 2

Guardians of the Galaxy is a major part of the 2nd phase of Marvel Studios lineup of feature-length films. The continuity of each film in this phase is as follows: Agents of Shield 1st season, Thor: The Dark World, Captain America: The Winter Solider, Guardians of the Galaxy, Avengers: Age of Ultron and Ant-Man.

Check out the video above to get a complete summary of Marvel Studios’ Phase 1 and Phase 2.

3. The Film’s Plot Revolves Around a Very Important Object That Could Affect the Well-Being of the Galaxy

The story of Guardians of the Galaxy centers on an American pilot named Peter Quill aka “Star Lord” (played by Chris Pratt). Quill ends up stealing a seemingly harmless orb that was another individual wants to obtain – Ronan the Accuser (played by Lee Pace).

Quill becomes the main focus of a galaxy wide manhunt, which forces him to enter into a truce with some fellow misfits – Gamora, Groot, Rocket and Drax the Destroyer. After discovering the true nature of the orb and how it could harm the galaxy, Quill and the rest of the Guardians fight to make a stand against Ronan and save the galaxy.

4. Chris Pratt Had to Lose Several Pounds in Order to Play the Film’s Lead Role

Chris Pratt has played several roles throughout his career and he’s played them at different physical body makeup’s. Pratt played a role in 2013’s Delivery Man, in which he came in at a weight of 295-lbs. In order to play the a much buffer and leaner superhero, Pratt slimmed himself down to 225-lbs. The heaviest role Pratt ever played was for The Five-Year Engagement, a film in which he came in at 285-lbs.

Two of the most popular Guardians come in the form of a a genetically engineered raccoon and a walking/talking tree. Rocket is being voiced by Bradley Cooper, while Groot’s vocals are being provided by none other than The Fast & Furious series star Vin Diesel.

6. A WWE Pro Wrestler and Zoe Saldana Are Starring as Two Other Members of the Guardians

WWE superstar Dave Bautista is starring in the film as Drax the Destroyer, a blade-wielding warrior who’s looking for revenge against Ronan. As for who’s playing the role of Gamora (an orphan, alien child who was trained by Thanos to be his personal assassin) a green-skinned Zoe Saldana will handle that character. 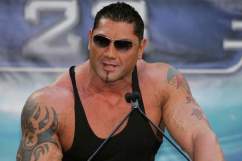 7. The Early Reviews for the Film Have Been Mostly Positive

It sounds like Marvel Studios has another critical hit on it’s hands if the early reviews are something to go by. The film’s Wikipedia page notes that:

Early reactions to the film from press screenings on July 19-20, 2014, were “overwhelmingly” positive. Germain Lussier of /Film called it “magnificent” and that Gunn “killed it”, with Silas Lesnick of ComingSoon.net saying it was “another big win for Marvel”. Eric Eisenberg of CinemaBlend felt Guardians of the Galaxy was “hilarious, action packed and [featured] a great ensemble”, with Steven Weintraub of Collider adding that Rocket and Groot had the best scenes.

8. Thanos Will Play a Role in the Film’s Proceedings

Fans who stayed to watch for an extra scene after the end of The Avengers got a special treat – the surprising debut of Thanos! For this major villain’s inclusion in the Guardians of the Galaxy, Josh Brolin handled the voice acting and performance capture duties. Thanos appears via hologram in some scenes from the film and also appears alongside Ronan the Accuser and Nebula (played by Karen Gillan) in a separate scene.

9. A Mobile Game Has Been Released in Anticipation of the Film’s Release

Disney Interactive recently released a mobile action RPG called Guardians of the Galaxy: The Universal Weapon for iOS, Android and Windows smart phone and tablet devices. Comic book writer/novelist Dan Abnett is responsible for putting the game’s original plot together. The overall storyline for this mobile game release will offer side-story content that compliments the event of the film.

10. The Film’s Official Soundtrack Will Be Offered as Three Different Releases

Marvel and Hollywood Records are going to do something a bit different when it comes to the release of the film’s official soundtrack releases:

• The Deluxe Edition of the soundtrack will feature the film’s score (composed by Tyler Bates) and classic 1970’s pop/rock tunes that are included in the movie.

• The digital score soundtrack release will be released by itself and feature all the music done by Tyler Bates.

• The licensed 1970’s pop/rock tunes will be packaged together as a soundtrack offering entitled Guardians of the Galaxy Awesome Mix Vol. 1. Each of the 12 songs on this album will consist of the tracks heard on Peter Quill aka “Star Lord’s” mixtape.