On Monday night’s episode of Hit the Floor, Sloane and Raquel continued to dig up information on Oscar, Ahsha faced the unfortunate reality about her father, and we witnessed a kiss we never would have expected.

Jude threatens Sloane, claiming that if she leaks any info on Oscar, he’ll have her fired. He also throws in that he’ll report the fact that Raquel is undocumented. A few scenes later, though, Jude pulls Raquel aside to tell her he wants to protect her, but references the letter that Olivia sent Raquel before she died. Sloane and Raquel deduce that Olivia must have sent Jude a letter too, since she never mentioned Olivia sending a letter to her.

Raquel goes to snoop around Jude’s apartment and finds the red letter that Olivia sent him and it has a phone number written on it… with the #22. She realizes he’s dealing to a player. The question is: which one. It doesn’t take long for Sloane to piece it together– Jude is dealing to Derek, whose jersey number is 22.

Ultimately, Sloane and Raquel tell Jude they know about everything, and he makes an agreement: he won’t say anything as long as they don’t. Let’s see how long this lasts.

Ahsha is still pissed that Jelena outed her mom in the slideshow, so she continues to sabotage her reputation. Or try to, at least.

She tricks Jelena into leaving her iPad in the car one day, and opens it up to find an email she ends up forwarding to the LA times. The next day when she shows up to practice she sees Zero being interrogated by the media for abandoning his “bible-thumping” principles.

Jelena is then interviewed about her boyfriend “sleeping with prostitutes” and goes on about how she’s hurt and heartbroken about the whole ordeal. She’s lying, of course, but manages to come across as a strong, independent woman– exactly what Ahsha didn’t want to happen.

At the end of the episode, Jelena threatens Ahsha, telling her she only put that picture of Sloane in the slideshow to set Ahsha off.

Ahsha approaches Coach to talk about his flakiness and drinking, and he immediately apologizes for her having to nurse his hangover, which we saw in the last episode. She says she’s been monitoring how he’s missed practice and a coach’s dinner, though, and ultimately gives him an ultimatum: her or alcohol.

When you hugged me at breakfast, I could smell alcohol on your breath. My mom may have stuck around when you were drinking, but I won’t.

Pete, unsurprisingly, says he chooses her. It doesn’t last long, though. He and Lionel sneak out for a dip, and when Lionel offers him some champagne, he takes it. Ahsha then catches Lionel in the elevator with a clearly drunk Pete.

That night, when the team is boarding a plane for their game, German comes up to Ahsha and asks her where Pete is. She says she’ll go get him but when she goes into his room to fetch him, he doesn’t wake up. The episode closed with an unconscious Pete lying in his bed as Ahsha tried to vigorously wake him up.

4. Kyle Dates Three Guys At Once

Kyle dates three potential suitors on this episode, and they’re all filthy rich. The guys figure out, soon enough, however, what her whole scheme is about. But, alas, they’re competitive, and they give into her antics.

The competition comes down to this: whoever gives the best gifts gets the girl.

Kyle is ecstatic that she has three super-wealthy guys fighting over her. They each want to prove that they’re the most worthy bachelor with the biggest wallet, so they’re in. In the ‘showdown’, one guy gives her a diamond necklace, another gives her a designer red dress, and the third buys her an apartment.

While trying on her beautiful dress in her nice new apartment, Kyle gets a text from Oscar asking how she’s liked his friends and whether she’s ready to do him a favor. Uh oh.

While Zero is freaking out about his reputation being shot, Jude grab him and kisses him! We always knew that Jude was on Zero’s side, especially after he was made Zero’s sole agent, but we didn’t know he liked him that way. It’ll be interesting to see where this goes next week. 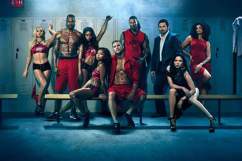 Hit the Floor: 5 Fast Facts You Need to Know