The CW welcomes Rob Thomas’ iZombie to its line-up of vampires, werewolves and superheroes. A tragic night leaves medical resident Olivia “Liv” Moore a zombie, who has to cope with trying to live a normal life while craving fresh human brains to eat.

Thomas will debut an extended preview of his new TV series at the 2014 San Diego Comic-Con on July 25 and join the show’s Q&A panel including stars Rose McIver, Malcolm Goodwin, Rahul Kohli and Robert Buckley.

Here’s what you need to know about Olivia’s transition to the undead.

1. The Coroner’s Office Supplies Plenty of Brains for Olivia

Olivia leads a normal life as a medical resident who’s engaged to her handsome fiancé Major Lilywhite (Buckley). Unfortunately, one night after attending a party, she’s turned into a zombie that needs to feed on human brains to survive.

Given her undead state, she breaks off her engagement with Major and takes a job at the Seattle coroner’s office so she can access to fresh brains from the already dead without having to kill anyone. By consuming the dead victims’ brains, Olivia can recapture their memories which can help medical examiner Dr. Ravi Chakrabarti (Kohli) and homicide detective Clive Babineaux (Goodwin) solve their murders.

McIver described the show to TVFanatic as a “zombie procedural” with comedy and suspense elements:

Catch a couple quick glances of Olivia’s zombie in the trailer for The CW’s upcoming schedule above.

2. Learning to Become a Zombie Came Naturally to Rose McIver

McIver told TVGuide in the video above she had no problem slipping into the skin of a zombie, but learning how to become a medical student “was alarming” to her. Her character Olivia has problems of her own now that she’s become a part of the undead and still has to live amongst her friends and family. She explained:

It’s a very subvertsy idea that you become a zombie and you’re just this undead force. You’re still engaging with the people around you and you still have personal problems. She doesn’t want to eat brains so she does it in the most ethical way possible by eating the brains of dead people.

McIver has recently starred on ABC’s Once Upon a Time and Showtime’s Masters of Sex. She will star in Lifetime’s Petals on the Wind, the sequel to Flowers in the Attic. She takes over the part of Cathy Dollanganger, who was previously played by Kiernan Shipka for the younger version of the character.

Thomas brings another female-driven show to The CW after revisiting his spunky sleuth Veronica Mars in a Kickstarter-funded movie. He teams up with his Veronica Mars movie co-writer Diane Ruggiero and frequent collaborator Dan Etheridge for iZombie.

The TV writer’s previous credits include creator of Starz’s Party Down, the 1998 series Cupid and its 2009 reboot and helped to develop The CW’s 90210 with Jeff Judah and Gabe Sachs.

In addition to the iZombie panel, Thomas will take part in Entertainment Weekly’s The Visionaries: TV Showrunners panel on Thursday, July 24 at 4:30 p.m. in Hall H. He will be joined by Sleepy Hollow and Scorpion‘s Alex Kurtzman and Roberto Orci, The Vampire Diaries and The Originals‘ Julie Plec, and The Flash and Arrow‘s Greg Berlanti.

4. ‘iZombie’ Is Loosely Based Off the Comic Book Series

The series follows Gwen Dylan, a zombie gravedigger in Eugene, Oregon and her friends Ellie, 1960s ghost, and a were-terrier named Scott.

Heading to Comic-Con®? You might walk away with the official #iZombie bag! pic.twitter.com/gNZHMy1i63

iZombie did not screen its full pilot on July 23 due to casting changes in the episode. The Q&A session with Thomas, Ruggiero and the cast will still occur on Friday, July 25 at 11:30 a.m. in Room 6BCF.

None of the cast members attending the panel were replaced. A 15-minute extended preview for the show will be shown in place of the pilot episode. Warner Bros. has produced an iZombie bag available to those going to Comic-Con.

iZombie will premiere on The CW at midseason. 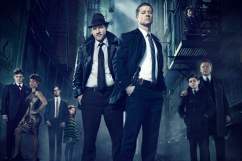