Singer-songwriter Jewel announced she’s getting divorce from husband Ty Murray in a letter posted to her website. The couple married in 2008 after 10 years together and share a two-year-old son, Kase. She called their separation a “thoughtful and tender undoing of ourselves,” a phrase similar to Gwyneth Paltrow “conscious uncoupling” used earlier this year.

Learn more about what tore apart the Alaskan songstress and her rodeo cowboy:

1. Jewel and Murray Didn’t Want Anger to ‘Burn the Ties That Bound’ Them

Jewel and hubby Murray wanted to part with their friendship still intact, especially for their son. In the letter, Jewel said their relationship fell apart for the same reason they came together, “they both value growth”:

Growth became tragically and undeniably stifled as a couple, and we believe we can find it again in setting each other free. We truly believe we can find greater happiness apart than together, and this is why we are taking the enormous and heartbreaking step of divorce.

Jewel met her future husband at a Denver rodeo in 1999, according to People. She moved onto his 2,200 acre ranch in Stephenville, Texas soon after they met. The couple lived there with their son (see Kase riding a horse on the ranch below).

In 2008, Jewel and Murray eloped to the Bahamas for an intimate wedding at The Cove Atlantis resort, according to People. Their only guests were Jewel’s former keyboard player Jason Freese, who officiated, and his wife Amy.

In the first year of marriage, Murray considered his relationship with Jewel much more than newlyweds, he told Cowboys & Indians magazine in 2009. “It seems like we’ve been married for a long time,” he said when talking about living on their ranch for the last 9 years together:

We get to spend a lot more time there than you’d think. When we’re together on the ranch we really have the whole day. We don’t get up and go to the office from 8 to 5. Both of us have unique jobs. Sometimes Jewel is with me… and sometimes I’m where she is. But when we’re at the ranch, we’re away from it all.

3. Jewel Gave Birth to Son in an Emergency C-Section

Jewel planned on having a natural birth and studied hypnobirthing, but had to undergo an emergency c-section on July 11, 2011, according to People. Doctors discovered the baby’s heartbeat had dropped at an appointment a week after her due date had passed.

She told People that she felt “lucky to be pregnant in the modern age,” so doctors could catch the anomaly:

We felt thankful that we had good doctors and a good hospital nearby, and that everything was okay. I’m so lucky that we have a healthy baby boy. That’s all I cared about.

4. Jewel Was Frightened to Live Her Life in the Public Eye

In the letter, Jewel admits she feared living her life in the public eye. The singer found success with her first album Pieces of You that debuted in 1995, but didn’t gain notoriety until 1997 when it peaked at No. 4 on the Billboard 200. The album produced hits like “Who Will Save Your Soul,” “Foolish Games” and “You Were Meant for Me.”

I remember being so frightened by the prospect of living a life in public when I first got signed to a label. I was a damaged and earnest child/folk singer, nothing like the slick and polished personas I saw on TV and in pop culture. I finally made my peace with it by committing to always being honest about who and what I was.

Murray, known as “The King of the Cowboys,” won seven World All-Around Rodeo Champion titles from 1989-1994 and his seventh in 1998. He suffered multiple serious injuries during his career and retired in 2002 when he lost the “drive to do what it takes to compete at the highest level,” he told the PR Newswire.

5. The Couple Made Multiple TV Appearances Together

Jewel and Murray appeared on TV together as themselves in shows like CSI, Extreme Home Makeover, and WWE Raw. The couple also planned to participate on the eighth season of Dancing with the Stars, but Jewel had to drop out due to breaking both the tibia bones in her leg, according to USA Today.

Jewel’s family stars on the Discovery series Alaska: The Last Frontier. Her father Atz Filcher Sr. stars with as a homesteader who lives without plumbing or modern heating and hunts for the family’s food. 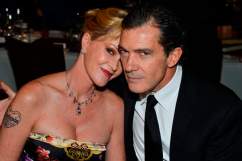