Kim Zolciak-Biermann and Kroy Biermann are one of the most loving couples we see today on reality TV. Tonight is the season premiere of their show Don’t Be Tardy. Let’s get a look at what to expect this season and check out all the details on the beautiful blonde couple.

1. Don’t Be Tardy Has Turned Into a Delightfully Chaotic World of Children

This season has evolved even more than last season in the family department for Kim and Kroy. Buzzfeed writes:

Since last season, Kim’s life has not slowed down. Fresh off the birth of their twins, Kane Ren and Kaia Rose, Kim and Kroy are juggling life with two teenagers and four kids all under the age of four.

So, how does Kim manage to maintain a little balance among the chaos? She tells Buzzfeed:

Believe it or not, I’m very strict about schedules. I think that maintaining everyone’s schedule is important and helps us stay organized. It’s very much a balancing act between my husband and the kids. There is always something going on throughout the day!

As far as what we’ll be seeing from Kim this season on the show, she reveals:

They will also see me recovering after the birth from the twins and trying to cater to each of my children and making sure that they are receiving an equal amount of attention. In the midst of it all with the children, I still try to manage to get some alone time with my husband. It’s definitely a lot of laughs and comedy this season and it was one of the best years that I have had filming.

2. Last Season Kroy Was Injured and Couldn’t Play for the Falcons

Kim met Kroy when she was on the Real Housewives of Atlanta as he was participating in a dance competition. At the time, he was a successful athlete, and still is. Unfortunately, last season, Kroy became injured and it was very difficult to get back on track. Kim revealed:

It has been crazy, especially with my husband rehabbing … We are so excited! It was devastating to have the injury, and he has worked tirelessly to return. It is definitely a blessing, because he was not able to walk for several weeks. He was able to put a sneaker on for the first time the day that I delivered the twins. I’m really happy for him now and I know that he is beyond excited.

Fortunately, Kroy is back in action so that he can help maintain the gorgeous lifestyle he, his wife, and kids are used to. According to Wetpaint, the couple are each worth a pretty penny individually as well as together.

While Kim’s probably worth about $1.5 million, she’s not alone anymore. Above all else, Kim’s earned her newfound financial stability the old-fashioned way: by scoring herself an NFL hubby. Celebrity Net Worth puts Atlanta Falcon Kroy Biermann around $3.5 million and, judging by the house the happy family now lives in, he’s certainly willing to share the wealth.

3. Kroy Gets a Vasectomy On the Show

Kim just keeps popping out babies and Kim revealed that she is definitely pushing for Kroy to get a vasectomy on the show to ensure that they are done with their clan of six. While two of Kim’s daughters are from previous relationships, Kroy treats them as his own. When Kroy and Kim got married, Kroy gave them rings as well to symbolize his love for them. Later on, Kroy adopted them both as well.

In addition, to Kroy’s vasectomy, Kim gets plastic surgery to perk up her boobs and gets her hernia tended to as well.

4. Over the Winter, Kim & Kroy Were Reportedly Facing Eviction

Check out a video of Kim & Kroy’s dream home under construction. In February 2014, Radar Online reported:

Kim Zolciak‘s dream home has turned into a financial nightmare. Just weeks after Zolciak was forced to take out a $300k loan to finish construction on her Atlanta mansion, RadarOnline.com has learned that she’s been ordered to cough up thousands of dollars in back taxes — or move out … According to tax documents obtained by Radar, Zolciak and her husband, Kroy Biermann, were recently served with two tax liens: one from the City of Milton, Georgia, for $1,665.26, and the other from the State of Georgia and Fulton county for $10,572.67. Zolciak and Biermann were notified that they must pay the money within 90 days of the liens’ January 9 and 11 issuance dates.

Everyone goes through issues and hiccups when it comes to buying or building a home and the Biermann’s are no different. Fortunately, all is well in that department now.

5. The Two Have Prevailed Over a Great Deal of Family Drama

Kim and Kroy had a wedding special on Bravo, showing the ins and outs of their tying the knot. Throughout the process, Kim’s mother was very jealous and became out of control to the point where Kroy and Kim had to have her escorted out of their wedding. Have a look at the above clip, which just shows one of the many problems that Kim’s mother has caused.

Currently, the Biermanns do not speak to Kim’s parents and she says she doesn’t miss them because of all the problems they’ve caused her throughout her life. Kroy’s family is also now out of the picture. According to Kim and Kroy, though Kim has made many efforts, Kroy’s parents do not accept their family because they didn’t like that Kim had children from previous relationships. They also didn’t like the way she was portrayed on the Real Housewives of Atlanta. 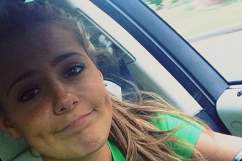