Is Lea Michele pregnant? Glee fans went crazy when a tweet reading, “Before this gets out to the media, I would like to announce to my fans that I am pregnant,” was posted on Lea Michele’s Twitter. Her rep has denied that her client is pregnant, so it looks like Lea Michele’s account was hacked … Hello Magazine writes:

Lea Michele’s representatives have denied that the Glee actress is pregnant and confirmed that her Twitter account was hacked.

What a way to start off the 4th of July, huh? 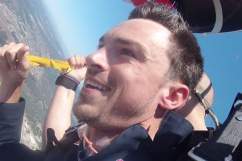 Read More
Celebrities, Lea Michele
Just a little while ago, Lea Michele announced that she was pregnant on Twitter ... or did she?