Playing the lead character in TNT’s Legends, Sean Bean‘s chances of dying on screen yet again lower significantly. At least for awhile. The actor has died 25 times in TV and movies, most famously being beheaded as Ned Stark on Game of Thrones season one.

In Legends, Bean plays undercover FBI agent Martin Odum who works in the Deep Cover Operations (DCO) division, whose “uncanny ability to transform himself into a completely different person for each job” will backfire when he starts to question his own true identity. The TNT crime drama will screen the first episode at the 2014 San Diego Comic-Con on July 24 and host a panel after with Bean and the show’s executive producers Howard Gordon, Alexander Cary and David Wilcox.

Here’s what you need to know before the show’s TV premiere on August 13 at 9 p.m.

1. Martin Odum Isn’t the Man He Believes Himself to Be

Martin fully commits to his undercover identities so much so that back in the FBI offices he can easily slip back into them without even trying. He’ll begin to question his own identity though when a mysterious stranger suggests that Martin isn’t who he thinks he is.

Wilcox told TV reporters about Bean’s ability to take on one character with multiple personalities:

I think it speaks to Sean’s ability to kind of almost chameleon like step into these different roles and do it really seamlessly, and, you know, he deeply imagines sort of what that character is… I think it’s really sold. I think it feels really real.

Watch Martin seamlessly transition into his stuttering, former construction worker Lincoln Dittman in the video above.

Death by stabbing. Death by shooting. Death by strangulation. Bean’s acting resume includes just about every way to die and he’s well aware of his reputation. The subject of the actor’s many deaths was the first question asked at the recent summer press tour for Legends on July 10:

His personal favorite: Boromir in Lord of the Rings: The Fellowship of the Ring where he was struck down by three arrows, but managed to keep fighting until his death. Watch that and all of his on-screen deaths in the video above.

Photoset: Infographic; The Many Deaths of Sean Bean by FHM http://t.co/ZeSgchhiZM

TNT is taking full advantage of Bean’s grave background, starting a Twitter campaign called #DontKillSeanBean. Even the actor has embraced it.

3. ‘Legends’ Is Based on the Robert Littell Novel

Gordon developed the series based on Robert Littell‘s 2005 spy thriller Legends: A Novel of Dissimulation. In the book, Martin is a retired C.I.A. agent who lives and works in Brooklyn as a private eye.

Michael Wright, president and head of programming for TNT, explained to The Hollywood Reporter the appeal of bringing Littell’s novel to the small screen:

Legends has everything you want in a good spy drama: intriguing characters, multi-layered plots, a terrific cast and lots of action and suspense. At the center of it all is Sean Bean, giving an outstanding performance in an extremely complex and difficult role.

4. The Show Has a Good-Looking Cast

Rounding out the cast are Ali Larter, Rob Mayes, Tina Majorino, Steve Harris and Amber Valletta, and even Wilcox had to admit to TV reporters “they’re a pretty good looking cast.” He doesn’t worry about his stars’ looks pulling the audience away from the story on screen, though.

Bean replaced movie star Brendan Fraser, who was set to make his TV series regular debut. He dropped out early on citing “creative differences over the direction of his character,” according to The Hollywood Reporter.

TNT will screen Legends at Comic-Con on July 24 at 12:30 p.m. in Room 6A. The show’s stars and producers will then offer another exclusive look and share secrets about the upcoming season. 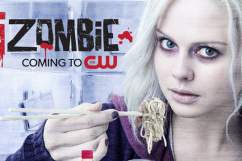 ‘iZombie’ on The CW: 5 Fast Facts You Need to Know