FX’s new series, Married, revolves around a middle-aged couple with three children who struggle to maintain an exciting sex life as they combat the monotony of the suburbs. Judy Greer (Arrested Development) and Nat Faxon (The Descendants) star as the show’s leading couple, with a supporting cast of renowned comedians and actors.

The series premieres on FX on Thursday, July 17.

Married has received overwhelmingly positive reviews from critics. Variety describes the show as having an “indie-film sensibility, with each of the leads conveying just enough vulnerability to offset their odious ways…”

This has felt much more like an independent movie. Very understated, very grounded. It’s not like Ben and Kate didn’t have heartfelt moments but I feel like this lives in a more honest place in terms of what relationships are really like. I don’t think we strive all the time to be funny on this show. I think that’s one of its strengths in a sense.

It’s about a bunch of people who are married or are going through divorces and about their function and dysfunction. I happen to be in a functional/dysfunctional marriage with Paul Reiser.

2. Grier Took the Part to Work With Faxon

Faxon, who plays Russ Bowman in the show, was announced to lead the series as the husband in April 2013. Greer was then cast as the role of his wife, Lina Bowman.

Greer was interested in the show only after she learned Faxon had been cast. She told Backstage:

He made me want to do it. I’m at an age where I’m definitely going to be playing the wife-mom roles; that’s where I’m at and that’s fine. So now I have to sift through all the eye-rolling wife and overburdened mother roles that there are and figure out what is going to be the least horrible, the least cliched, the most interesting, the one that I want my friends to watch because they’re going to be like, ‘Yes, oh my God, yes!’

Greer, who worked with Faxon in The Descendants , confessed to Channel Guide that she loves going to work each day. She said of Haxon:

I think he might be perfect. It’s kind of frustrating.

The actress recently published a book called I Don’t Know What You Know Me From: Confessions of a Co-Star , in which she discusses her experiences playing the best-friend in films.

3. It Was Created by the Guy Who Wrote ‘The Last Exorcism’

Andrew Gurland, who created the show, is a writer and director who has many credits under his belt, including The Last Exorcism, The Virginity Hit, Mail Order Wife and Cheats.

When Collider asked Faxon if Gurland draws on his star for ideas, Faxon said the boss has the writing under control. The character of Russ is based on the life of Gurland, who also has three children.

Faxon said Gurland is collaborative when it comes to the character of Russ, and the whole process of creating Russ’s arc has been organic and open. Faxon told Collider:

…even if there’s subtle line changes or if there’s subtle emotional moments that feel like they can be enhanced or don’t feel completely honest, he’s like ‘Oh let’s take it out. Let’s do something else. Screw that. Throw that away.’ It’s very comforting to be around a creator like that. It feels collaborative.

4. The Lead in the Show Co-Wrote ‘The Descendants’

Faxon, who grew up in Massachusetts and attended Hamilton College, is an alumnus of the sketch comedy troupe The Groundlings. He met his current writing partner, Jim Rash, while performing with the improv group, and the two co-wrote the screenplay for The Descendants, which won them an Oscar in 2012. Faxon and Rash also wrote and directed the screenplay for The Way, Way Back, which starred Steve Carell and Sam Rockwell and premiered at the Sundance Film Festival before being picked up by Fox Searchlight Pictures.

Faxon and Rash recently spoke to HuffPost Entertainment about their experiences working together:

You both met at The Groundlings, but do you remember your specific meet-cute?

Nat Faxon: I remember the first time seeing Jim and just being awed by his beauty. It just literally my jaw dropped.

5. FX Ordered 10 Episodes of the Show

http://youtu.be/_7vYQOv4jLk Entertainment Weekly describes Married as a half-hour comedy “about being miserably in love”.

When discussing the series with Collider, Faxon said:

The first couple table reads, I was barely getting any laughs on anything I was doing. I was totally in my head – ‘I suck. I’m going to get fired. This is not going well.’ But I think that’s just what this show is. Obviously there’s craziness and elements that are heightened but I think it lives in a very truthful place — a sort of warts and all environment where you get to see stuff that is not meant to be funny, that is meant to be real and truthful. 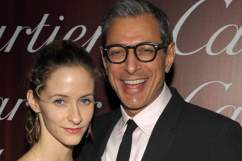