Melissa McCarthy and Ben Falcone are Hollywood’s favorite couple these days. The two both grew up in the Midwest but met while taking an improv class together in L.A., and they’ve been writing scripts together ever since.

They worked together on the instant classic Bridesmaids and are about to hit the big screen again with the release of their new film, Tammy. Melissa stars in the movie, which she co-wrote with Falcone, who directed it.

Here’s what you need to know about this dynamic duo.

McCarthy and Falcone have been together for a decade, and everyone hopes it stays this way. Executive producer Toby Emmerich told Variety about his experience working with the couple, and he couldn’t help but rave about them:

They are amazing. Everyone at our company loves them. As filmmakers, as marketers, as partners, as producers, as writers, they’re fantastic.

Despite their talent, the two are extremely humble. They laughed at the prospect of being compared to comedian couples like Lucy and Desi, which has been happening a lot recently.

2. Their Best Ideas Come in the Car

McCarthy and Falcone love making one another laugh, but they find the car is their favorite “idea place“. Falcone told Reuters:

First of all, whenever we have good ideas, it’s almost always in the car because you drive a lot in L.A. … And you just say stupid things to make your spouse laugh, and that’s usually when we come up with something that’s maybe fun.

The pair got hitched in 2005 and have two daughters, Vivian and Georgette. And while the entertainment industry has made it difficult for some couples to thrive, McCarthy and Falcone started spending much more quality time together when their careers took off. You may remember Falcone for his role as an air marshal in Bridesmaids, but if you haven’t seen it, you can check it out here.

3. They’re Both From Small-Town Illinois

In a hysterical interview with ABC News, Falcone was asked if he ever saw McCarthy back home, since she went to college where he grew up:

I knew who she was. She went through a Goth phase.

I didn’t know it but he said we were at the same parties together — which I just find the most bizarre thing. It wasn’t until 10 years later that we met.

The first character Falcone saw McCarthy play was a spazzy girl who kept going back to a Kinko’s to meet a guy named Todd. The interaction may have happened over a decade ago, but it sure left an impression on the director.

4. Falcone’s Pet Name for Melissa Is ‘The Mooch’

“Mooch” is the endearing nickname Falcone has given his wife, with whom he’s been working on the Tammy script for the past seven years. McCarthy talked to Variety about the significance of the character in their day to day lives:

You work on something so long, and those characters kind of become real people and you get attached.

Funny enough, the idea for the character literally came from a dream. The Boston Herald reported Melissa’s hysterical recollection of the moment her husband decided he was going to write the new screenplay:

Ben came downstairs just having woken up and said, ‘I had a weird dream. You go on a road trip with your grandmother who drinks and sleeps around. So I’m gonna write that movie.’

5. They Have a Production Company Together

In February 2013, Vulture announced that McCarthy and Falcone were going into business together with their own production company, On The Day. McCarthy told Vulture:

We’ve been writing together for longer than we’ve been married. To be able to produce our own work and other people’s work that we are so passionate about is really a dream come true.

As of last year, they had signed on to produce Michelle Darnell, which is also written and directed by the duo, Cousin Irv From Mars, and Just Do It. According to Split Sider, the plot of Michelle Darnell revolves around a character McCarthy thought of while working at L.A.’s Groundlings Theater, and it was co-written by her, Falcone and Groundlings’ Steve Mallory. The movie will be about a self-help inspirational speaker who is arrested for insider trading.

Go here for plot synopses of these three new films. 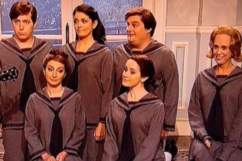