Michael Sheen has been linked to many famous women. His newest lady love is comedienne Sarah Silverman.

The two share the screen in Season 2 of Masters of Sex, premiering on July 13.

1. They Were First Linked in February

They were seen at Soho House on Feb. 6. Us Weekly reported that a witness said, “They were all over each other for a lot of the night.”

Silverman was also a guest at Sheen’s 45th birthday party. A source told Us, “”Sarah and Michael came and left together. She drove. When they left, Sarah opened her trunk so Michael could put all of his gifts in and then they drove away.

Sheen seems quite smitten, and told E Online, “She’s great. She’s a wonderful, wonderful person. She’s funny, obviously, but she’s so smart and so sensitive and thoughtful and kind.”

Coincidentally or not, Silverman joined Masters of Sex, the Showtime drama where Sheen places William Masters, a real-life sex research in the 1950’s.

The Hollywood Reporter announced that in the second season, Silverman has the recurring role of Helen, a palm reader and the former lesbian lover of Betty.


3. They Have Famous Exes

Sheen met Kate Beckinsale while performing in the touring play, The Seagull. They pair never married, even after having a daughter, Lily, together in 1999.

The actor also dated his Midnight in Paris costar Rachel McAdams. A source told People that the reason for their split was because Sheen did not want to have children:

Rachel wants to settle down and is dreaming of having a family. Michael always seemed content with their relationship. Since he already has a daughter, he feels no need to have more children. He wants to focus on his career.

Silverman dated talk show host Jimmy Kimmel twice during 2002 to 2009. In an interview with People, she admitted that she will always love him.

“We were together for so long and tried our best to make it work. I can think of him now and don’t have that edgy feeling anymore. I just love him to pieces,” she gushed.

The couple walked the red carpet at the Met Gala in May. From the picture above, we can see the location of Silverman’s strategically placed hand.

When the hosts at The View confronted her about the picture, she said, “What am I supposed to say, I’m an a** man.”

Silverman also recently brought her man to the premiere of her film A Million Ways to Die in the West.

As a sex researcher in Masters of Sex, Sheen has countless sexual encounters, and his girlfriend watches.

Page 6 reported that Silverman said, “I watch him have sex on TV all the time.”

When asked if she would watch them live, she said, “No, I’d never go to set when that…I don’t want to know. It’s so not sexy.” 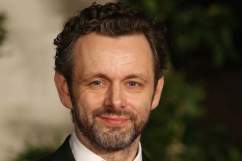 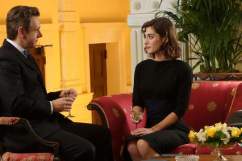