21-year-old Nick Jonas and 22-year-old Olivia Culpo may be one of the best looking couples in Hollywood these days. The youngest Jonas Brother has been dating Miss Universe for over a year now, and the two seem to be just as head-over-heels as ever. Could there be wedding bells in their future?

1. They Road Tripped to Las Vegas

According to Beauty World, Culpo and Jonas took a recent trip to Las Vegas with some other friends, where they “partied the night away” to celebrate Jonas’s new music video, “Chains”.

The two have also been documented spending time together in Disneyland and Hawaii after Nick wrapped the character of Ian Wright on Hawaii Five-0.

Culpo’s Twitter is filled with praise for the youngest Jonas Brother’s new music video. Jonas has also posted a few things about his beautiful girlfriend on his Instagram and Twitter accounts, making it clear to other guys out there that she’s his lady.

In April, the singer introduced Culpo to his childhood friend, Maya Kibbel, which can only mean he’s as serious about Culpo as he appears to be.

3. He May Propose Soon

Apparently, a ring may be in Culpo’s future. The Daily Mail writes,

Friends apparently wouldn’t be surprised at all if Nick proposes to Olivia soon…The youngest of the Jonas Brothers took Olivia to meet his family in Dallas in October of last year and everyone seemed to adore her.

According to Hollywood Life, Jonas told his family that he intends on marrying Culpo, and thinks she’s the one.

Nick has told his family he wants to marry Olivia.

4. They Met at the Miss USA Pageant

Jonas met the pageant queen at the Miss USA Pageant, which he co-hosted with Giulana Rancic in June 2013. According to the Daily Mail, Jonas’s family was at first a bit skeptical about Culpo, but “are now very supportive” of their relationship.

4. She Thanked Him When She Walked As Miss Universe for the Last Time

Culpo thanked Nick when she walked on stage as Miss Universe for the last time, according to Hollywood Life.

To the very special person who puts a smile on my face everyday, I can’t wait to start this new chapter with you.

Prior to the show, Culpo posted a pic on her Instagram account that said “To the person who puts a smile on my face every day… 1 hour until showtime ;) #missuniverse”.

Jonas responded: “I got my eyes on you. You’re everything that I see’ Happy to be in Moscow supporting my girl on her final walk as miss Universe. So proud of you @oliviaculpo.” 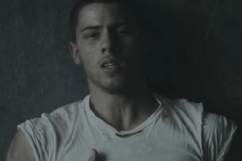