Leah Hession, a 6-year-old girl from Ireland, who bravely battled a rare form of kidney cancer, died on July 18 after a long fight with the disease. The tragic news was posted on the Facebook page of cancer charity, Aoibheann’s Pink Tie.

1. Little Leah Got to Meet Niall Horan in May

One Direction’s Niall Horan tweeted a picture he took with Leah back in May, saying:

RIP Leah , it was an honour to have met you! Very brave young lady! Thoughts are with Leah’s family at this time!

2. Her Tragic Death Was Announced by a Cancer Charity

On the Facebook page of Aoibheann’s Pink Tie, the charity wrote:

I had the privilege of meeting a very brave little girl and her dedicated parents and family, and witnessed again love beyond human comprehension.

To watch parents smile and act normal in the face of the worst nightmare that could be unleashed upon a mother or father, is heart breaking inspiring and truly a humbling experience.

Leah gave me a huge hug the day she meet her hero’s 1 D in Croke Park, I will always treasure that hug and the memories of her beautiful smile.

We offer our heartfelt sympathy love and compassion.

There is a light that never goes out it is called Love.

3. She Watched One Direction in Ireland From a Presidential Suite

Little Leah pictured with her mother and brother back in April. (Facebook)

Back in May, while One Direction were on a record breaking run inside Ireland’s biggest stadium, Croke Park, Niall Horan invited Leah to be his guest at the stadium’s Presidential Suite. Leah’s mother, Lorraine, was brought up with Leah and the two were given hotel suite and a police escort to the stadium. After the meeting, Leah told the Daily Mirror:

He was awesome. I love him.

4. When She Met Horan, She Was Too Week to Walk

On the Monday before Leah got to meet Horan, she had completed her latest run of radiotherapy which left her too weak to walk. Brave Leah was the only person in Ireland suffering from her rare kidney disease.

5. Her Parents Want People to Donate to Their Local Children’s Hospital

Little Leah’s funeral will be on Saturday July 18 with her parent’s requesting donations be made in her name to Galway Hospice and St. Bernadette’s Children’s unit of University Hospital in Galway. 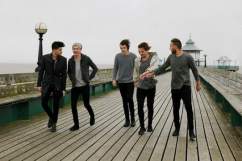 WATCH: One Direction’s ‘You and I’ Music Video

Read More
5 Fast Facts, Breaking News, Celebrities, Deaths, One Direction, R.I.P.
6-year-old Leah Hession succumbed to her rare illness on July 18 but thanks to the support of Niall Horan of One Direction, her case is known worldwide.