On tonight’s episode of Rizzoli & Isles, a wealthy woman dies and the governor asks Maura Isles to facilitate her death certificate. She soon realizes the woman was murdered, and Jane takes over the crime scene.

Maura starts to teach a seminar and meets a new guy that she becomes very attracted to.

Find out if Maura can find love and complete her favor to the governor in the episode, “The Best Laid Plans.”

1. The Governor Calls Maura for a Favor

Here's a peek at TONIGHT's episode of #RizzoliandIsles! RT if you'll be watching at 9/8c on @tntdrama. #TNTTuesdays pic.twitter.com/smT6KWuIQB

Maura receives a call from the Massachusetts governor asking her to facilitate the death certificate for the wealthy Mrs. Chelsea Rothsburgher. The butler rushes Maura to hurry up and sign the certificate, but the M.E. can’t do that when she determines Chelsea’s death as suspicious. She’ll need to do an autopsy.

While Jane distracts the governor’s phone calls, Maura determines that someone pushed a syringe full of air into Chelsea’s blood stream and on to her heart. Her death was a murder.

Everyone on the victim’s staff and her two sons were being well compensated in the will. Her one son Kalter does have a drug problem, but he couldn’t trust himself with the inheritance he stood to receive until he could stay sober for a year. Her other son Larry’s business was going under but he had a rather disturbing alibi for the murder (Frankie will never be able to un-see Larry’s sexual exploits).

Maura is having second thoughts about teaching her forensics seminar at BCU after the dean asked her to change the course for credit. That means she will have to grade her students.

Always prepared, Maura brings her own sound and video equipment. A helpful gentleman in the classroom only needs Maura’s laptop to hook up to the class’ projection system. She mistakes him for the AV guy, when he’s actually another professor at the school.

He sits in on her class and complements her lecturing style. She asks for advice on grading, and admits he used to throw up before and after he entered his grades as a teaching assistant. Maura thanks him for the not so great advice, and then he asks her to join him for coffee. She agrees.

3. Jane and Frankie Get an Unexpected Confession

After the detectives suspect Larry Rothsburgher of killing his mother, Chelsea’s staffer Paula confesses to the murder. In fact, Paula did try to kill Chelsea but at her boss’ request. She inserted a high dose of morphine into her IV bag that would have killed Chelsea peacefully, but it was done so after the real murderer inserted the air embolism.

The detectives determine that the murderer must have overheard Paula and Chelsea’s plan for an assisted suicide, and didn’t want the sick woman to die so easy. This wasn’t about the money, someone wanted Chelsea to suffer.

4. Maura Falls for the Professor

Maura really likes the professor Jack Keystone, but her last few boyfriends haven’t turned out so great (the face licker, the man whose murder she got framed for, and the serial killer who literally wanted her body).

I agree with Maura, a face licker AND a serial killer is a rough dating resume, but we can't let her give up on love! #rizzoliandisles

She invites Jack to her office to break the news that she can’t date him. She suggests he get checked for any psychological problems, but he won’t accept her hesitations. He’s scared of starting a new relationship (he’s been divorced 6 years), but his biggest fear is never falling in love again. That’s enough for Maura to rethink decision and give Jack a second chance.

The two of them have a good first date (he’s fond of the sidecar on Maura’s motorcycle). She celebrates not dating a serial killer with Jane and Angela who are celebrating Jane not getting fired after she messed with the governor on the phone.

5. The Illegitimate Son Killed His Step-Mother

Frankie and Vince find a connection between the chauffeur Brad and the Rothsburgher family. Brad’s mother used to work for the family, and he started working for them after she died when he was 16. They notice a resemblance between Brad and Chelsea’s husband Larry Rothsburgher Sr. and realize he was an illegitimate son of the family.

Jane and Vince interrogate Brad and he says Chelsea wanted his forgiveness for not accepting him into their family earlier. Brad knows she didn’t want to accept the fact that her husband had an affair, so she had tried to pay him off. When he saw Paula stock-piling morphine, he knew Chelsea was trying to die peacefully and he didn’t want her to end her life easily when she regard his life as dirt. It took three to four minutes for her to die, and during that time, Brad thinks she was trying to forgive him before she passed away. 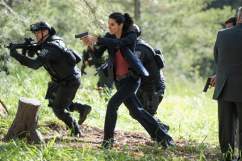