Danica McKellar is engaged to her BF Scott Sveslosky — and she's showing off her rock! http://t.co/qC72j3pjK6 pic.twitter.com/KzOpkj8Y9T

Danica McKellar aka Winnie Cooper is engaged and it’s not to Kevin Arnold.

The former child star and Dancing with the Stars contestant used social media to break the happy news.

Here’s what you need to know about her fiance.

Scott Sveslosky works for SheppardMullin as a partner in their L.A. office.

According to lawyers.com, he graduated from the University of Southern California in 1998. He stayed at the same university to attend law school and got that degree in 2001.

On the firm’s site, it details his experience as such:

A Los Angeles news blog reported the hourly rates of the lawyers at the firm, including Sveslosky:

Yep, my amazing boyfriend Scott & I are engaged!! (He's the one @iamvalc did a shout out to on #DWTS) :) Hugs to you all!

He had a 10-year-old son, Hunter, from a previous marriage. McKellar has embraced this fact, and told People, “We are looking forward to merging our families.”

4. Val Announced Their Relationship on ‘DWTS’

In the clip above, Val Chmerkovskiy, McKellar’s partner on DWTS, thanked Scott for allowing him to dance with his girlfriend.

This year, McKellar spent Mother’s Day with her boyfriend.
The Daily Mail obtained photographs of the happy blended family at brunch in L.A. 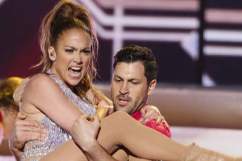