San Diego Comic-Con 2014 is coming up soon. As in, “next week” soon. From July 24, 2014 (Thursday) to July 27, 2014 (Sunday), the San Diego Convention Center will be taken over by thousands of proud geeks and nerds. Plenty of companies who have a say in the forward movement of the entertainment industry will show up to make some huge reveals and announcements.

Before the world gets taken over by SDCC 2014 news, we want to make sure you have an clear understanding of what’s about to happen. We’re gonna detail the movies, panels, video games and whatever else is going to hit the show floor.

Here’s a preview of everything that’s going down at San Diego Comic-Con 2014!

1. The Hobbit: The Battle of the Five Armies, Mad Max: Fury Road and Even More Films Will Be Showcased

On the films front, several future blockbusters will shown to any of the lucky fans who get to sit down during it’s panels. Warner Bros. Pictures has already announced some of the films they’re looking to showcase in Hall H – The Hobbit: The Battle of the Five Armies, Mad Max: Fury Road and Jupiter Ascending (which will be shown in that massive gathering room at 10 a.m).

The WWE Films production/distribution company is heading over to SDCC 2014 in order to give fans a sneak peek at Leprechaun: Origins and See No Evil 2. Some of the other films that are slated to be shown off to panel goers are Sharknado 2: The Second One, Kevin Smith’s upcoming Tusk and Columbia Pictures’ big screen adaptation of the Goosebumps young horror novel series.

2. Warner Bros. Television Will Present Their Newest Slate of Shows on Preview Night 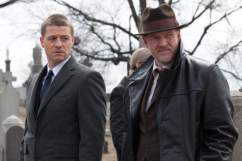 On July 23, 2014 (Wednesday), Warner Bros. Television will be on hand to show off special sneak peek pilot screenings for their newest shows. At 6 p.m. in Ballroom 20, fans will get an exclsuive look at The Flash, Constantine, iZombie and Teen Titans Go! For more information on how WB TV’s planned screenings will go, check out the link posted above.

3. A Ton of TV Shows Will Get the Spotlight: Here’s the Show Properties That Will Be Shown on Thursday

Along with WB TV’s preview night screenings, several other TV shows will be showcased during the rest of SDCC 2014. There’s so many TV shows to list here, but we’ll do the tough job of jotting down all of the announced shows that will show up. Here’s a look at the shows that will be shown on July 24, 2014 (Thursday):

5. Saturday’s Lineup of TV Show Panels are Stacked, Too

On July 26, 2014 (Saturday), another great lineup of TV show panels will transpire: