The TV show adaptation of iZombie will be previewed on SDCC 2014 Preview Night, but fans who missed that event will get a 2nd chance to see this show in all its glory. This soon-to-be CW show will be presented via a pilot screening, which will also include a Q&A session with interested fans. Who will be there to speak on DC’s next release? None other than Rose McIver (Once Upon a Time), Malcolm Goodwin (Breakout Kings), Rahul Kohli and Robert Buckley (One Tree Hill). Executive producers Rob Thomas (Veronica Mars) and Diane Ruggiero-Wright (Veronica Mars) will also make an appearance.

On October 12, 2014, the highly anticipated 5th season of AMC’s The Walking Dead will finally rise! If you’re attending SDCC 2014 and are dying to get a hint of what’s going to happen at Terminus, you’ll need to take a set in Hall H for this panel. Along with a fan Q&A session, this event will debut a sneak preview of the next episode. Andrew Lincoln, Norman Reedus, Steven Yeun, Lauren Cohan, Danai Gurira, Melissa McBride, Chad Coleman, Michael Cudlitz, executive producer and showrunner Scott Gimple, executive producer Robert Kirkman, executive producer Gale Anne Hurd, executive producer Dave Alpert, special effects makeup supervisor and executive producer Greg Nicotero and Chris Hardwick (The Nerdist, Talking Dead) will all be on hand for this one.

Marvel’s takeover of the big screen has been bubbling for a while now, but now they’re preparing to rule the world of TV too. Jeph Loeb (Marvel’s head of television) and the casts of Marvel’s Agents of S.H.I.E.L.D. and Marvel’s Agent Carter will be at SDCC 2014 and provide some inside info on the upcoming seasons for both shows.

This fall, the highly praised Arrow TV series will begin airing again on Wednesdays via CW. Comic book fans and even non-comic book readers have been enthralled with intense action that Team Arrow find themselves in. The newest threat of Malcolm Merlyn will be the main focus on the next season of the show, which will be covered in this TV show panel. Fans can direct their questions towards Arrow series stars Stephen Amell (Private Practice), Katie Cassidy (Supernatural), David Ramsey (Dexter), Emily Bett Rickards (Flicka: Country Pride), Colton Haynes (Teen Wolf), Willa Holland (The O.C.), Paul Blackthorne (The River), and John Barrowman (Torchwood), executive producers Greg Berlanti (The Flash), Marc Guggenheim (Green Lantern) and Andrew Kreisberg (Fringe). 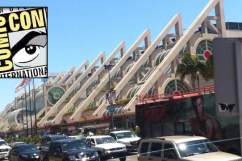