Tonight is the premiere of Sharknado 2: The Second One on Syfy at 9:00 p.m. EST … Are you ready? To prepare you for all the shark attacks, screaming celebrities, and

1. Ian Ziering and Tara Reid Are Back

Fin and April must take on Sharknado once again, in hopes of saving innocent people and it’s a good thing because Tara Reid believes that a “sharknado” could actually happen in real life … No, we’re not joking. Tara Reid had an interview with GQ and said:

You know, it actually can happen. Which is crazy. Not that it — the chances of it are, like, you know, it’s like probably ‘pigs could fly.’ Like, I don’t think pigs could fly, but actually sharks could be stuck in tornados. There could be a sharknado.

2. Sharks Take a Bite Out of the Big Apple

Here’s the plot, compliments of IMDb:

A freak weather system turns its deadly fury on New York City, unleashing a Sharknado on the population and its most cherished, iconic sites – and only Fin and April can save the Big Apple.

3. The List of Celebrity Cameos In the Film Is Very Long

Several celebrities make an appearance in the shark-infested film, including Vivica Fox, Mark McGrath, Perez Hilton, Al Roker, Billy Ray Cyrus, Pepa (Sandra Denton), Andy Dick, Matt Lauer, and Kelly Osbourne. Fox and McGrath have bigger parts than the others, taking on the roles of Skye and Martin Brody. If you recall, Martin Brody was actually the name of the main character in Jaws. 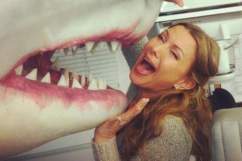 4. Sharks Take The Subway Too … Apparently

Above is a sneak peek from the movie where Ian Ziering (Fin) and Mark McGrath (Martin) take a subway ride. The two discuss their rocky relationship when, all of a sudden, the train hits a big bump as the tunnel floods. Perez Hilton makes a cameo and complains about the train delay and then a large shark bursts onto the train (of course.) As passengers race to the other train cars, Ziering battles the shark with … a baseball bat.

5. Sharknado 2 Is Providing Its Fans With Survival Tips

Don’t we all need to know what to do if a mass tornado of sharks hits our town? Well, the Syfy channel is helping us out by posting lots of survival tips on their YouTube channel. Have a look at one of them in the above video. 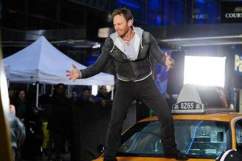