TNA may be in trouble! It has been reported that Spike TV has decided not to renew their contract with the wrestling company, which means they will no longer air Impact Wrestling. Here’s everything you need to know this apparent reveal regarding TNA losing their cable TV partner and what may have lead to their deal falling through.

1. Spike TV Executives Informed TNA’s President About The News Late Last Week; One Man May Have Led to this Happening

TMZ reported that multiple sources from within TNA noted that TNA president Dixie Carter was contacted by Spike TV executives last Friday (July 25, 2014). These same network execs decided to break the news to Dixie that the cable TV network will not renewing TNA’s TV contract. Spike TV reportedly decided not renew TNA’s TV contract after they found out Vince Russo will secretly still working for TNA.

In a surprise move, Vince Russo announced his decision to leave his TNA job role behind:

Wrestlezone.com went on to report that TNA’s current Director of Creative Writing Dave Lagana is now looking for another role as a producer for ROH:

A source has now informed us that Dave Lagana, former WWE creative writer and current Director of Creative Writing for TNA, has approached Ring of Honor as a possible next step. He is interested in producing future live PPV events, as well as managing all of ROH’s online and social media presence.

2. Dixie Carter Reportedly Informed Her Staff of the Sad News

Upon learning that Impact Wrestling would no longer be broadcast on Spike TV, Dixie Carter reportedly informed some of her staff of the news. Some reports state that she noted that TNA would be leaving Spike TV on their own, due to Spike TV’s lack of promotion of the wrestling federation. Other reports state that Spike TV were the ones to initally cut ties with TNA in regards to airing Impact Wrestling in the future.

3. TNA Officially Sent Out a Brief Statement After The News Leaked

After learning about the news leak regarding their Spike TV deal, TNA issued a brief statement on the whole ordeal:

We have not signed an extension and are still in negotiations.

Spike TV/Viacom also issued a press statement on their contract proceedings with TNA:

TNA is currently rumored to having an important meeting at TNA headquarters in Nashville today (July 28, 2014) in regards to Spike TV’s decision. Dixie Carter even sent out a tweet that dispels all the rumors around TNA:

Negotiations with @SpikeTV are ongoing. Stay tuned and be sure to tune in this Thursday night for Ultimate X on #ImpactOnSpike!!

4. TNA Has Been Hurting Financially for the Past Few Months

At the beginning of 2013, TNA took their show on the road for live TV tapings. However, the funds required to keep touring TNA around the country proved to be a huge financial undertaking. TNA returned to their TV taping home base (Universal Studios) in November 2013 due to the rising costs of taping their show in different locations. TNA’s last set of tapings took place in the Hammerstein Ballroom in New York City, which have reportedly led to the show garnering some solid TV ratings.

TNA’s money issues are well documented, though – they recently let go of longtime talents such as AJ Styles, Daniel, Kazarian, Matt Morgan, Hernandez etc. TNA’s former Vice President Jeff Jarrett departed from the company in December 2013, yet he still holds a stake in the company as its minority owner and continued investor.

5. TNA Has Been Partnered Up With Spike TV for a Very Long Time; Several Wrestlers Tweeted About TNA’s TV Cancellation

During TNA’s birth in May 2002, they made their stay via PPV in the form of weekly shows. They soon made their way to Fox Sports in 2004, a deal that expired in May 2005. TNA then decided to air upcoming episodes of TNA iMPACT! on the internet for a few months before Spike TV stepped in. TNA signed a TV deal with Spike TV in 2005, which led to the 1st episode of TNA iMPACT! airing on the network on October 1, 2005. TNA’s current deal with Spike TV is reported to be ending sometime around October 2014.

A few tweets from wrestlers Sean Waltman, Billy Kidman, Kevin Nash and Matt Morgan have already made the round about TNA’s TV deal reportedly falling through:

Ppl are asking my thoughts on the Spike TV/TNA situation. Spike & Wrestling are a great fit. I dare someone to get their shit together.

Can we at least wait to see how this tna stuff plays out before everyone starts telling us who we need.

And I personally hope they get a deal. There are not many places to work in the wrestling business these days. In ring or out of ring.

Let's be honest, they are another place for guys to work and that is a good thing. But they are not competition. #NoOffense

Sorry to my friends at TNA. .Hope the office can get a TV deal.

If it's true Spike doesn't renew deal w/Tna, it's a double edged sword IMO. 1. They WERE and ARE atrociously bad at advertising that show

whatsoever. I never used to see us advertised except maybe an hour b4 impact started. Not acceptable. And 2. the bad side of sword is

obviously that it takes a TON of Tna's revenue away that they counted on to pay the wrestlers. But, 4 the co's future, I think the further

they GET THE HELL AWAY FROM SPIKE, the better the co will be. That's just MY opinion obviously.

The most annoying part when still wrestling there was I'd see Bellator constantly advertised and we were doing a better # at the time. Hell,

even Manswers got better PR by the network than we did!! Again, in long run,this SHOULD BE better 4 Tna IMO. 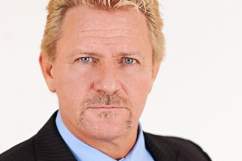