On tonight’s episode of The Leftovers, the story centers on the Rev. Matthew Jamison. The bank is going to foreclose on his church unless he can raise $135 thousand before the sale closes the next day.

See a typical day for the reverend in the aftermath of The Departure and whether he can raise the funds in time to keep his church in “Two Boats and a Helicopter.”

Matt gives a sermon about a little boy (later revealed to be him) who prayed for attention after his little sister was born. He ended up contracting cancer and nearly died. He then tells another story about a little girl, Emily, who’s been in a coma for nine days. He asks his congregation to pray for the little girl, but before they can a man bursts through the church doors.

The man starts beating Matt in front of the 10 people in attendance and then shoves one of the reverend’s flyers in his mouth. The flyer was for an Amber Johnson who worked at the local pharmacy and illegally sold prescription drugs to the local college kids.

At the hospital, Chief Kevin Garvey suggest Matt quit with the flyers, but the reverend insists that people need to hear the truth about those who departed.

After the doctor releases him, Matt goes to visit the little girl again. She’s has since woken up and gone home. Matt thinks she woke up because his congregation prayed that morning, but the nurse tells him she woke up last night.

2. Matt Performs a Baptism and Adds a New Name to His Departed Paper

A young man named Grant McNary comes to Matt seeking a baptism for his baby son. Grant had to sneak away from his wife, who has given up on a religion since Oct. 14. The young father offers to pay Matt for the service, but Matt tells him it’s on the house. Grant instead offers up the name of one of his former co-workers who disappeared in The Departure. Andrew Sasaki was a drunk who gambled away his paychecks and when he ran out of money, he depleted his children’s college fund.

Matt goes to the casino where Andrew always gambled looking for more information. He pleads with the manager that he needs to expose these people who departed for they really were so they can be separated from the innocents, like the manager’s 9-year-old niece, who also disappeared that day. Just before he leaves the casino, Matt sees two pigeons land on a roulette table on the lower level and then the birds fly away again.

3. The Bank Is Going to Sell Matt’s Church

Matt keeps receiving calls from the FDR Bank. He finally picks up the call from Jim Lewis asking him to stop by the bank for some important news. Matt goes and learns his church is about to be sold unless he can pay the $135 thousand that the other buyer has offered. Jim doesn’t know the buyers, but thinks they’re probably a company who want the land to build apartments on.

He doesn’t have the money, so he goes to his sister’s home that of Nora Durst. He asks to borrow the money from her and tries to guilt her with the fact that their parents left the church for both of them. Nora barely knew their parents because they died when she was seven. When Nora says she doesn’t have the money, Matt asks if they can use the benefit money she received from the departure of her husband and two children. The only ways his sister will give him the money is if he stops making a flyers of the departed with their sins listed.

He refuses. He tries to tell her The Departure was a test for what comes after, and Nora argues that her brother is failing that test and his flyers and the church aren’t working. Upset, he reveals that her husband Doug was having an affair with their children’s preschool teacher. He said it’s the one story he won’t publish.

When Matt goes home, his wife’s at-home nurse Roxanna asks for her payment. He doesn’t have the money, but she can’t keep working for him if she doesn’t get paid.

That night after he takes care of his wife Mary, who’s in a comatose state where only her eyes flick back and forth, he stares up at a picture of Jesus on his wall. He then gets an idea and springs out of bed. He calls Roxanna back over and promises her that he will have the money he owes her by the morning.

4. Matt Finds Luck at the Casino

Matt heads over to the Garvey’s house and takes a shovel into their backyard. When he gets there, he finds Kevin’s wife Laurie sitting on the kids’ swing set. He informs he that Kevin Garvey Sr. left something buried for him that he can take whenever he wanted. Laurie promises to keep his secret as long as the reverend won’t tell her family that she hangs out back there at night.

He digs up an old JIF peanut butter jar with the flyer of Judge Roy Haber, who Nora hinted Matt had a problem with earlier, and a role of $20 thousand. After he leaves, he stops at a red light in the center of town where he sees the pigeons again on top of the traffic light.

Matt takes the money to the casino and cashes it in for chips. He places them all on “red” at the same roulette table he saw the birds land. The dealer spins the wheel and the ball lands on red. Matt’s chips double to $40 thousand and he bets on red again. He wins again to make his total $80 thousand and bets one more time. A couple stands by and watches him make his fourth and final bet on red once more. Matt closes his eyes to pray and when he opens them the ball has landed on red to bring his chip total to $160 thousand. Matt cashes in his chips and walks out of the casino.

He starts his car, but the man who watched him win knocks on his window. He asks Matt for $100 and then grabs Matt out of the car and beats him up for all the winnings. Matt won’t let him get away though, and beats the man’s head into the ground until he stops moving. The guy’s girlfriend just screams as Matt picks up the envelope and gets back in his car to scream.

5. The Guilty Remnant Buy the Church

The next morning, Matt drives back to his house after replacing the $20 thousand at the Garvey’s. On his way, he sees a couple kids throw a large rock at one of the Guilty Remnant (GR) members, knocking the man to the ground. Matt gets out of his car to help, but the kids return and throw a rock right at Matt’s face that knocks him out.

Matt wakes up in a dream outside his church. The GR member Gladys stands outside wearing a blue dress and handing out programs. He walks into the church and follows a little boy through a door off the altar. Inside he sees himself with his parents while a doctor delivers the bad news that Matt’s cancer is spreading. He then flashes to him and a little girl (his sister Nora) watching their house burn down while their parents were inside. His next flashback is the day of The Departure, where he’s driving with his wife Mary when their car is struck by another car’s who driver disappeared. The accident leaves Mary in her comatose state. His last flashback is him and Mary having sex in their bedroom, but when he looks back up at Mary he sees Laurie Garvey instead. His bed catches fire and then he starts to burn before he finally wakes up in the hospital.

He jumps out of bed and tries to call the bank but his phone won’t turn on. He tells the incoming nurse to call the bank and tell them to stay open until he can get there. When he arrives, Jim tells him the sale already went through and that it’s been three days since Matt came into the bank. His accident had him in a coma from early Tuesday morning to Thursday afternoon.

Matt walks up to his church and sees members of the GR painting the windows white and throwing away the Bibles from inside. The group leader Patti takes letters off the front sign as Matt just watches her. 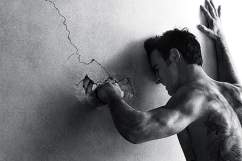 Read More
HBO, Spoilers, The Leftovers, TV
On tonight's episode of The Leftovers, the Rev. Matthew Jamison takes center stage as he tries to care for his comatose wife and raise money to save his church in "Two Boats and a Helicopter."