The Vamps are a British pop rock band with four members – Brad Simpson (lead vocals and guitar), James McVey (lead guitar and vocals), Connor Ball (bass guitar and vocals) and Tristan Evans (drums and vocals). Check out the facts on the band to see what they’re becoming increasingly more popular every day.

1. The Vamps Are Performing on the Today Show This Morning

The Vamps have opened for popular artists like The Wanted, JLS, Little Mix, Lawson and Demi Lovato. Now, they’ve moved on to their own headlining gigs. They recently appeared on the radio with a live performance for Ryan Seacrest and this morning they performed for the Today Show. 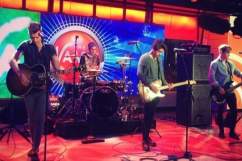 Lead guitarist James McVey realized he wanted to form a band and actually discovered Brad Simpson via YouTube. Simpson is actually the most searched band member of the guys and his birthday is coming up very soon, turning 19 years old on July 28, 2014.

3. They Have a Big Tour Coming Up

The guys are heading out on a big fall tour called “Meet The Vamps,” named after their debut album. The UK tour will kick off in September and October 2014. Check out one of their most recent performances above.

4. James McVey Is Dating a Celebrity

Probably the coolest couple on the entire planet, James and Sophie apparently met through Twitter, and since sparks starting flying online, the pair have been on some tres romantic dates together. After watching the Vamps boys perform at their big gig in Hyde Park, Sophie has been hanging out with James and pretty much living the dream, with him wining and dining her in Nando’s and taking her on some lovely little drives and cute coupley walks.

5. The Band Recently Appeared On a Soap Opera

The band decided to make an appearance on the small screen as Wikipedia gives great detail:

In May 2014, it was announced that The Vamps would be making a cameo appearance in soap opera, Hollyoaks on 14 May 2014. Hollyoaks released a teaser clip about The Vamps’ appearance on YouTube. They were seen getting a picture with Peri Lomax (Ruby O’Donnell) as she goes to their concert with Sienna Blake (Anna Passey).