The guys from British band The Vamps appeared on the Today Show this morning to give fans some killer performances and talk about their upcoming tour. Stay tuned for the performance video coming shortly.

Before their performance of their hit “Somebody To You,” the guys chatted about how terrible their first rehearsal together was, how they differ from bands like One Direction (though they love them too), and how most of their music was developed in New York.

For more information on the band, click the below link: 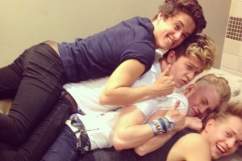 The Vamps: 5 Fast Facts You Need to Know