Tony Parker was spotted in Vegas over the weekend with a bunch of friends in what could have been his bachelor party.

The basketball star is set to wed his girlfriend and baby mama, Axelle Francine, some time soon.

The 32-year-old has been playing basketball for 13 years, and will now take a second chance at married life.

Let’s look at his life on and off court.

The 6’2″ point guard plays for the San Antonio Spurs.

He told USA Today about when he got drafted:

There had never been a European point guard in the NBA and there weren’t a lot of Euros at all. Just Dirk [Nowitzki] and Peja [Stojakovic], really. I was hoping to be drafted, maybe play a little bit and be a role player. I had no expectations back then because there was not a lot of Europeans. I was so happy when I got taken. I was siting in the stands and went up and shook David Stern’s hand. My dream was coming true and I was getting an opportunity to be in the NBA.

You can watch some of his highlights in the video above.

2. He Was Raised in France

He was born in Belgium to an American father and Dutch mother, but was raised in France.

This year, he became the largest shareholder in a professional basketball club in France, Asvel.

He has been with French journalist Axelle Francine, since 2011.

During a live chat in June of 2013, he confirmed they were engaged by saying that to, “spend time with my fiance” was one of his favorite things to do after games.

On April 30, they welcomed their first child, a son named Josh.

Parker could hardly take any time off from this Spurs schedule, since the baby was born on the same day as Game 5 of the 2014 NBA playoffs.

4. He Was Married to Eva

One of the reasons for the end of their three-year marriage was that Parker was texting with Erin Barry, wife of his former teammate Brent Barry.

In an emotional interview above with Piers Morgan, the first she conducted after the divorce, Longoria said:

You know, he’s not a bad person, he just wanted something else. I don’t hate him for it, I really don’t. I would never speak publicly about what happened or why we got divorced because I love him and we still talk, we are still in each other’s lives.

In his first statement about the breakup, he said, “Eva and I have been discussing our situation privately. I was aware that she would be filing for divorce in Los Angeles.”

5. He Released an Album

Songs included “Balance-tois,” “Premier Love,” and “Top of the Game.” Watch his singing in French in the music video above. 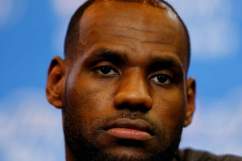 LeBron James Picks Cleveland: The Tweets You Need to Read