Vetzabe Jocette Torres, aka Vee Torres, came into Jo Rivera’s life in the 3rd season of Teen Mom 2 and later on, the couple moved in together. Read on for the facts on Vee, her turmoil with Kailyn Lowry and her relationship with Jo.

Reportedly, Vee has had financial troubles and was even sued by her college. Radar Online reported:

According to court papers obtained exclusively by RadarOnline.com, Bloomfield College sued Vetzabe “Vee” Torres for $2,585.33, claiming that she owed on a defunct book account. But Vee responded back to the lawsuit in May claiming that she had thought that the sum had been paid for through her financial aid package. “The money that is claimed I owe for a book to my attention has been paid because every book I had to get for school I paid with the money I had in my account from Financial Aid,” she wrote in a civil action answer to the suit.

Vee said that she was under the impression her books were paid off and suggested making a payment plan. By June 7th, the bill was paid.

2. On Tonight’s Episode of Teen Mom 2, Kailyn Wants to Get Together With Vee

Kailyn requests that she and Vee finally get together to meet on tonight’s Teen Mom 2 and to see where Jo and Vee are living. Jo has known Kailyn’s husband for quite some time, but Kailyn has never wanted to meet Jo’s girlfriend until this moment. Things go well and Kailyn really likes Jo and Vee’s apartment. They all go out to dinner and Kailyn apologizes for not making their meeting happen sooner.

3. In the Past Jo’s Baby Mama Didn’t Want Vee Around Her Child

While Kailyn admits that some of her concerns came from insecurities in the past, there was a time when she didn’t want Vee around her child. She felt that Vee was posting inappropriate things online, referencing alcohol and other things like that. Kailyn also made sure in the past that Vee would not be present when Kailyn and Jo would meet to drop of their son Isaac. As time has passed, Kailyn’s been more open to accepting Vee in Jo’s life, but it’s still a rocky road.

When Jo first told Kailyn about Vee, Kailyn became emotional and said, “I don’t want this girl around my son. There’s no reason for her to be playing mom.”

4. Vee Has Appeared In a Music Video of Jo’s

Vee is an aspiring model and she’s also the girl who starred with Jo in his music video “Unthinkable.” Check out the video above.

5. Jo And Vee May Have Broken Up

On the Being Dad: A Teen Mom Special, the cameras gave a more in-depth look at Jo and Vee’s relationship. While Jo isn’t ready to move forward in their relationship, Vee wants to make a big move towards marriage and children. Vee spends much of her camera time dissatisfied in her relationship with Jo. Perhaps this led to a break up because, according to Vee’s Facebook account, she’s currently single. One could say that maybe she hasn’t updated her status in a while, but the most recent photo of hers was posted July 27, 2014, just a couple days ago. Nonetheless, Jo’s Twitter profile photo is still of himself and Vee. We’ll just have to wait and see what the real story is … 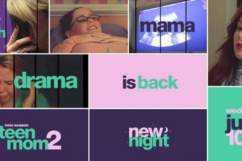