Update: WELP! It looks like all the videos for this awesome trailer have been taken down (sadly) But you can check out this fan-made re-creation of the same teaser. We have the trailer in GIF form below, too.

For those who got to sit in on Warner Bros. Hall H panel at SDCC 2014, they got to witness a sneak peak of what’s to come.

The teaser trailer for the Zack Snyder-helmed Batman v Superman: Dawn of Justice had everyone screaming at the top of their lungs. And now, you’ll be getting giddy with glee too once you’re finished watching this. Come May 6, 2016, the trinity of Batman, Superman and Wonder Woman will grace the big screen.

We’re pretty sure that the footage will be taken down real soon, which is why we’re going to offer up this description of what went down:

It’s raining profusely in Gotham City. Batman can be seen turning on the Bat Signal while he’s donning his Bat Armor. The Bat Signal light up the dreary night skies. It then settles on an individual floating in the sky – Superman. Superman’s eyes are glowing red while he’s staring right at Batman. Batman stares back at Superman and gives him a sly smirk. End scene.

A lot of cool images that are tied to this next DC Comics movie blockbuster made their debut at SDCC 2014. You can check them all out below:

The 1st look at Ben Affleck as Batman. 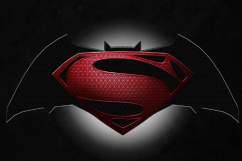