Zac Efron and Michelle Rodriquez were getting close this July 4 weekend.

Could this be just a summer fling or a true Hollywood love match?

Let’s look into what we know so far.

1. They Were Photographed Kissing in Italy

During July 4th weekend, the pair was on a boat in Sardinia, hooking up with each other. According to CBS, they flew into Sardinia on a private jet.

The Daily Mail published these photos, which show Efron leaning in for the kiss, and being very touchy with Rodriquez, who is wearing a striped bikini.

In this Instagram video posted by Rodriguez, titled “Happy 4 America,” there is a male voice laughing that seems to sound like Efron.

Michelle Rodriguez is winning, first she was with Cara Delevingne and now she's with Zac Effron pic.twitter.com/WJ2KG1BAiz

The Fast and Furious star admitted that she is bisexual in Entertainment Weekly.

They were first linked in January after they kissed and flirted at a New York Knicks game.

In early June, word came that the pair may have ended things and this new development in Italy seems to confirm that.

As news of the fling broke, Delevingne posted this telling quote on Instagram:


4. Zac Was Supposedly With Halston

They costarred in The Neighbors together and a source told E News, “They were seeing each other a bit during filming of their movie together and ever since he went to rehab they got a lot closer.”

5. They’re on Vaca With an Italian Businessman

Gianluca Vacchi has been documenting the trip on his Instagram page. 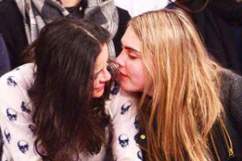