Zoe Saldana is expecting a baby with her husband Macro Perego.

The news broke this morning and this is what we know so far.

1. She Started the Rumor at the ‘Guardians of the Galaxy’ Press Tour

This picture she posted on Instagram revealed an apparent baby bump during the Guardians of the Galaxy press tour.

At the film’s premiere, she wore a tight-fitting dress, seen below, that further fueled the rumors.

Theybf even said, “Saldana has not confirmed her pregnancy, but last night’s lace Louis Vuitton Resort Dress was all the confirmation we needed!”

2. Her Husband Is an Italian Artist

She married Marco Perego in London in June of 2013. The artist, who started his career in New York City, has Saldana’s name tattooed on his arm.


3. Her Publicist Broke the Baby News to THR

The Hollywood Reporter dished on the happy news early this morning.

4. Her Roles in the Next ‘Avatar’ Movies May be Compromised Since she is scheduled to partake in three Avatar sequels, it hasn’t yet been reported what will happen now that she’s giving birth.

The Hollywood Reporter said that she finalized these negotiations in January.

On June 22, Us Weekly published photos of her sister Mariel’s baby shower in Beverly Hills.

The magazine reported that Mariel is due in July. 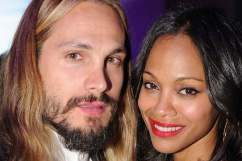