Besides walking the runway for Victoria’s Secret, Alessandra Ambrosio is managing two children, a fiance, and a fashion line.

Here’s what you need to know about the 33-year-old Brazilian who was once voted the “Sexiest Woman Alive.”

1. She Never Worked Out Before Becoming an Angel

The supermodel was the face of Calvin Klein in 1999 and Guess? in 2000 and became a Victoria’s Secret Angel at 22.

Before she had children, she would just “eat salad” if she gained “one or two pounds.”

After the brith of her daughter, she had three months to get in shape before walking the runway again. “I knew that I had the show to do after having [Anja] – and actually I was expecting my body to go back quicker,” she told Net-A-Porter.

It was at that time that she realized she would have to exercise.

She told Self magazine:

When I started with Victoria’s Secret at 21, I never worked out. Then when I got pregnant with my daughter, I gained about 60 pounds and had to walk the Victoria’s Secret show three months later,” she recalled. “That was the first time I had to really fight to get my body back into shape.

The model has been engaged to Californian businessman Jamie Mazur since 2008.

In an interview with Net-A-Porter, she talked about the openess of her native Brazil. “Brazil is a very sexual country. Women are always showing their boobs and butts on the beach,” she said.

4. She Takes the Stairs for a Workout

She talked to Self magazine about her workout routine:

If I look in the mirror and see cellulite — and I have some … I run the Santa Monica Stairs. I’ll go up and down the 170 steps four to six times, usually once a week. It definitely helps the butt and legs while you’re getting a little sun and fresh air at the same time.

Mazur has also gotten her into yoga, which she now practices times a week.

5. She Has a Fashion Line

Ambrosio’s foray into fashion came in March of 2014 with a line of clothing, accessories, and fragrance.

Alé by Alessandra is her fashion line for Planet Blue.

On the company’s website, the clothing is described as “brazil-bohemia-meets-mailbu-chic.”

She summed up its style to Glamour, saying:

My inspiration is really a reflection of my lifestyle, and it’s Brazil meets Malibu. It’s bohemian chic. It’s comfortable. It’s sensual. It’s feminine. It’s very flowy with soft fabrics. The palettes are nude to cayenne and some midnight blue colors that we did for the nighttime. And there are different prints: from paisley to hand-dyed tie-dye. There are dresses, jumpsuits, and a little black dress, but it’s not your normal little black dress. And every girl needs to have one in their wardrobe. 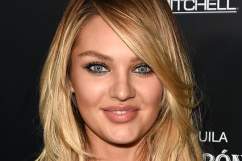