Angelina Jolie and Brad Pitt have finally tied the knot. The Associate Press reports that the couple were married on Saturday in France. Read on for the details on how their kids were involved, their upcoming movie as a married couple, and how they became Brangelina.

1. The Ceremony Was at Their Chateau

A file picture taken on May 31, 2008, in Le Val, southeastern France, shows an aerial view of the Chateau Miraval, bought in 2008 by Brad Pitt and Angelina Jolie. (AFP/Getty Images)

The Daily Mail reports that:

On Friday, the pair were seen arriving at Nice airport on a private jet, and are believed to be heading to Château Miraval, the wine château in the village of Correns that they have been leasing since 2008.

Then the Associated Press confirmed that the two were married Saturday at Chateau Miraval, France.

Jolie and Pitt wed Saturday in a small chapel in a private ceremony attended by family and friends. In advance of the nondenominational civil ceremony, Pitt and Jolie also obtained a marriage license from a local California judge. The judge also conducted the ceremony in France.

The bride is said to have worn a floor-length, antique lace and silk white dress and a locket that belonged to her late mother Marcheline Bertrand. Daily Mail reports: Angelina promised her mother before she died that she’d get married in France. They were extremely close and this is Angie’s way of honoring her.’

Jolie’s father Jon Voight was not told about the nuptials and Pitt and Jolie reportedly went right back to work after the wedding … wearing new rings. The couple’s rings are said to have been designed by their friend Robert Procop. Have a look at Brad’s ring in the below Twit pic.

There it is! Brad Pitt shows off his new wedding ring http://t.co/AXAQHaP7WV pic.twitter.com/YA5xXL0yVb

2. Their Children Participated in the Wedding

Accompanied by their six children, Brad Pitt and Angellina Jolie appear before photographers upon their arrival at Haneda Airport in Tokyo on November 8, 2011. (AFP/Getty)

Brad and Angelina have six children together and they all are reported to have participated in the wedding. The Associated Press reports:

The couple’s children took part in the wedding. Jolie walked the aisle with her eldest sons Maddox and Pax. Zahara and Vivienne threw petals. Shiloh and Knox served as ring bearers, the spokesman says.

Brad Pitt had said in the past that his children were the main reason they wanted to get married … It was the childrens’ wishes.

3. The Couple Once Said They Wouldn’t Get Married Until Gay Marriage Was Legal

Originally, the couple said they wouldn’t marry until gay marriage was legalized throughout the entire United States. However, when marriage equality became legal in California in June, 2013, the couple decided that they would marry.

4. Jolie and Pitt Are Playing a Married Couple in Their Upcoming Movie

Jolie and Pitt reportedly fell in love while filming the movie Mr. and Mrs. Smith. The couple have been together over 9 years … According to Daily Mail, the wedding marks the 10th anniversary of when Pitt and Jolie began filming their first movie together. Now the two are going to be playing an on-screen married couple once again in their upcoming movie By The Sea. According to The Hollywood Reporter:

The couple will star together for the first time since Mr. and Mrs. Smith in 2005! Angie wrote and will direct By The Sea.

5. Both Have Previous Marriages With High-Profile Actors

Previously, Angelina Jolie was married to actors Johny Lee Miller and Billy Bob Thornton. Brad, on the other hand, was married to Jennifer Aniston and reportedly fell in love with Jolie while he was still married to Aniston.

When Jolie once revealed in an interview that she and Pitt fell in love on the set of Mr. and Mrs. Smith, Aniston said it was “not cool” of her. In addition, Pitt once said how boring his thirties were and how much he enjoys life now. Aniston had responded saying that Pitt is “missing a sensitivity chip.” 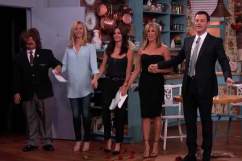