Ariana Grande appeared on the Today Show for a big round of performances, but what we didn’t expect is to watch her do the weather with Al Roker. And, what we really didn’t expect was to see Al Roker bouncing up and down with Grande singing her song “Bang Bang.” Just for fun, let’s check out Roker from a couple weeks ago doing his entire weather report to “Bang Bang” below:

After their little song together, Grande talked about how excited her grandmother will be about her singing and dancing with Roker. Check out the below Vine about it: 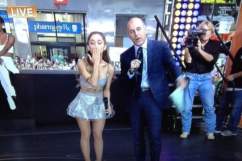 Read More
Al Roker, Ariana Grande, Celebrities
Al Roker and Ariana Grande teamed up to give us the weather on the Today Show this morning, along with an impromptu performance of "Bang Bang" together.