AshLee Frazier is a force to be reckoned with on Bachelor In Paradise. Read on for the facts on her Bachelor boyfriends, her relationship with Graham Bunn, and how she fakes it on screen.

1. Graham Bunn Is her Love Interest on Bachelor In Paradise

From the second AshLee saw Graham Bunn on Bachelor In Paradise, he is all she wanted, staking her claim right away. When Clare Crawley first asked Graham for a date, AshLee basically threw a fit, resulting in Clare backing off and taking back her invitation to him. Since then, Graham has been bonding with AshLee, though red flags keep popping up for him. AshLee’s failure to communicate with Graham and the scheming she does on the show raise concern for Graham.

For all the info on AshLee’s relationship with Graham, check out the below link: 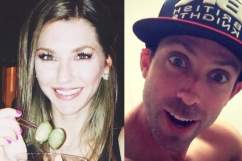 2. She Fakes It for the Cameras

On episode 4, AshLee decides to trash talk Clare Crawley behind her back to her love interest Zack without realizing she’s on camera. When Zack points out that she is indeed on camera, she freaks out and realizes her cover is blown. Lacy Faddoul and others on the show then reveal to the cameras that AshLee acts completely different off-camera than she does in front of the camera. When Graham finds this out, he is hesitant to accept a rose from AshLee. AshLee also makes a fake attempt to apologize to Clare, first playing dumb. Clare does not accept it and AshLee says Clare is a bitch when she thinks she’s not being filmed. AshLee really needs to be more aware of her surroundings.

3. Michael Garofola from The Bachelorette Used to Date Her

Michael Garofola was on Desiree Hartsock’s season of The Bachelorette and he dated AshLee Frazier in 2013. AshLee opened up about her relationship with Michael to Rumor Fix saying:

My first reaction was no way am I dating another guy from The Bachelor – I have been there, done that, and was over it. Then I met him and realized that would be absolutely foolish, he’s extremely smart, well spoken, carries himself with class and supports my dreams and goals.

4. Brad Womack and AshLee Had a Fling

In the spring before AshLee and Michael Garofola met, AshLee got together with Brad Womack, who had proposed to Emily Maynard on his season of The Bachelor. According to Us Weekly, AshLee and Brad Womack met at an event in Texas, but their relationship was limited to being weeks long.

5. She Does Not Find Love in Paradise

This is a giant spoiler, so beware. Graham finally comes to his senses and breaks up with AshLee. On episode 7 of the show, the game changes and couples are allowed fantasy suite dates without the cameras. At this point, each couple must evaluate their relationship and move forward or break up. According to Reality Steve, Graham breaks up with AshLee before their fantasy suite date.