Check out the 5 Fast Facts on Bachelor In Paradise couple AshLee Frazier and Graham Bunn … Beware of some big spoilers!

1. AshLee Went on Bachelor In Paradise In Order to Meet Graham

From the second AshLee appears on BIP, she makes it clear to all that she came on the show with the intentions of getting to know Graham Dunn. She expresses to the other girls, as well as Graham himself, that she’s had a crush on him for a while. On tonight’s episode, she even reveals to him that she does a little cyber stalking and follows his Instagram account … and she really starts to scare him.

2. When Clare Asked Graham Out on a Date AshLee Had a Meltdown

In the very beginning of BIP, Clare Crawley didn’t know that AshLee had a crush on Graham and she asked him to go on a date. Graham accepted and AshLee had a meltdown. She retreated to her room crying and saying nasty things to herself about both Clare and Graham. Upon hearing about this, Clare speaks with AshLee and tells her she is going to un-invite Graham on her date and take someone else because she’s not trying to ruffle any feathers. Then, AshLee becomes angry with Graham and refuses to talk with him right away, which raises some red flags for Graham. Despite this, Graham gives AshLee a rose and the two begin a courtship. 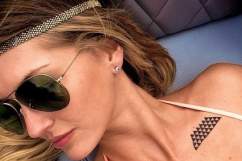 3. Graham Breaks Up With AshLee on the Show

4. AshLee Has Dated Several Men from the Bachelor Franchise

AshLee seems to be a serial Bachelor dater with quite a few relationships from the franchise under her belt. Wetpaint gives the full run-down:

She toyed with the idea of dating host Chris Harrison, though we never heard if anything happened there … But enter Brad Womack, who popped up out of nowhere on her Instagram feed in April 2013, just a month after her finale aired. The pair met through a friend, started dating, went to some weddings, and then broke up a couple months later. Next, she seemed to be flirting with Season 9 hottie Zak Waddell, but it could just be the fellow Texan thing that motivated the chatter… Although proximity didn’t come into play for her next foray, with Zak’s castmate Michael Garofola, who she dated despite their Miami to Houston commute. Needless to say, it didn’t work out…

5. There Are Rumors That AshLee and Graham Actually Dated Before the Show

There are always rumors surrounding Bachelor franchise stars and one is that AshLee and Graham actually dated before the show. This was reported by Life & Style. However, on the show, we are following a storyline that AshLee and Graham have never dated and don’t really know each other prior to Bachelor In Paradise. What do you think?

Tell us your opinion and join the Bachelor In Paradise discussions by clicking here to view our BIP FORUM.