Blanda Eggenschwiler is making headlines right now for her announced split from boyfriend Joe Jonas. The two have “amicably” called it quits. For more information on the couple’s break up, feel free to visit the below link: 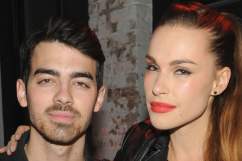 1. Joe Jonas’ Rep Confirmed the News of the Split

Joe Jonas’ rep released this statement about the couple’s break up, which sounds pretty standard for Hollywood splits:

Joe and Blanda have mutually decided to part ways. The split was amicable and the two remain friends, with great respect for one another.

As far as the cause of the split, that has not been released.

2. Blanda Met the Jonas Brother Through a Mutual Friend

Blanda met Joe Jonas through a mutual friend in November 2012 and the two began hanging out, hitting up Hollywood events together, and attending parties. The last event the two were spotted together at was one for Cadillac and Refinery29, where an observer told Us Weekly, the couple seemed tense and Jonas only posed for photos by himself.

3. Blanda Is a Graphic Designer, Most Known For Her T-Shirt Designs for OBEY Clothing

Blanda is a talented graphic illustrator and designer. Her personal bio reads:

New York based graphic designer and illustrator Blanda Eggenschwiler seamlessly navigates the worlds of print, fashion and drawing, bringing her signature feminine yet minimalist aesthetic to all of her endeavors.

Blanda is highly known for her t-shirt designs with OBEY, but has been featured in Vogue, Rolliing Stone, Womens Wear Daily, and many other media sources. She was also the Art Director at the New York Times from 2010-2011. According to Hollywood Life:

5. Her Work Life Is a Chaotic Mess

Blanda was featured in an article with Vogue magazine where they asked her about her work ethic, how she comes up with ideas, and her organization skills. When asked what her organizational tips are, she replied:

I am definitely the wrong person to talk to about that! My workspace is organized chaos, as I like to call it. It is a mess, but I always know exactly where everything is. I have to be able to just leave things out so I can come back and continue working where I left off.

When Blanda isn’t working, she enjoys having dinner with friends, watching movies or listening to music by artists including Foster the People, Phantogram, Caribou, and Ratatat.