Here’s what you know to know about the woman who stole the country crooner’s heart.

1. She’s Known for ‘Father of the Bride’

At 19, she was studying theater at Northwestern University when she won the role of the daughter in 1991’s classic comedy, Father of Bride, alongside Steve Martin.

In the scene above, we see Martin struggling with the idea of giving his daughter away at her wedding.

2. Brad Saw Her in the Movie & Was Smitten

They met when Brad hired her to star in one of his music videos after having seen her in Father of the Bride.
“It was all a weird attempt to say “hi.” I just can’t believe it worked!” he told Redbook.

Watch the video below to see the pair in the video for his 2002 single, “I’m Gonna Miss Her.”

Kimberly did not feel the spark right away. She told CBS Sunday Morning, “He stalked me. That’s the long and the short of it. He says it was love at first sight for him, and for me it was more like love at first month or two.”

Brad told Redbook about his decision to marry her, “With Kim I realized that if I ever let her go, not only could I never do any better, but I would always regret it. So I had to marry her. I had no choice!”

3. She Has 2 Sons with the Country Star

In the video above, which is an interview Kimberly did with GMA, she speaks about her mother’s dementia, and how it will affect her children.

When I found out what her diagnosis was, I thought, ‘Wow, she’s just not going to know my kids.’ And what was so cool was seeing how she actually really did interact with my kids … You know, both down on the floor being really goofy and silly. And my kids adored her … they played really well together.

Brad told Redbook about the most important advice he’ll give his sons about women:

That there’s no more important decision in life than who you marry. It’ll determine your happiness, your fate — so many things. That when you get married, you have sealed what it will be like to wake up every day for the rest of your life.

4. Her Character Was Killed on ‘Nashville’

On the ABC drama Nashville, her character, Peggy, was killed off.

“That was unfortunate, shot through the heart with a stray bullet, I mean ‘C’mon,” she said on GMA.

“I’m lucky that she lasted as long as she did,” she added.

In April of 1997, she began dating the tennis superstar, who was, at that time, the number 1 tennis player in the world.

They split a year later, in May of 1998, and Sampras told reporters, “It’s not like we did anything wrong, but neither of us was going to make career sacrifices we might end up regretting or resenting. We’re two people with two demanding careers, and that opens itself to problems.”

In 2007, Sampras’ brother, Gus, told People, “I think Pete’s looking for someone with a good heart, someone who is close to her family, and Kim has those qualities. That’s very much like he is.” 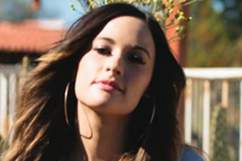