Dorothy Wang makes the show #RichKids of Beverly Hills pop on E!. Season 2 kicks off this Sunday at 10 p.m. EST, so let’s get started by getting to know Wang and what makes her so watchable.

1. Dorothy’s Boyfriend Cooper Is Under Investigation In the New Season

Dorothy and the gang go on a trip to China and no one understands where Dorothy’s boyfriend Cooper is … Dorothy doesn’t want to talk about his cancelling and as she cries, she tells her friends that he had to work. Dorothy’s friends, especially Morgan, tell her how Cooper does not treat her the way he should. Check out the above clip as a broken-hearted Dorothy deals with a rocky relationship and the baggage that comes along with it.

Prior to cancelling the trip, Cooper calls Dorothy’s bff Morgan and starts to freak out about meeting Dorothy’s family. Morgan says he can’t back out, but Cooper sounds like he will flake out. Morgan tries to keep the faith, but we know what happens.

Check out a recent photo of Dorothy and Cooper below:

For more info on Cooper, check out the below links: 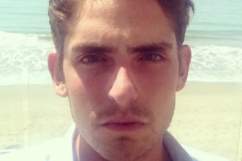 2. The Wang Family Is Highly Successful

3. Wang Is Still In Real Estate, But Is Taking On “Bigger Things”

Season 1 of the show started off with Wang being “funemployed,” but by the end of the season, she was working in real estate. This went very well for her because of all her international connections, especially having such a successful father. For season 2, E! reports that she is still working in real estate, but is also working on her own jewelry line. Dorothy told E!:

While I like doing real estate and I think it’s something very rational that I can do forever, I do want to focus on something that’s a little bit more creative. I’ve been working on a necklace line which should be available by the end of summer and I’ve been working on my website. I want it to be interactive and something that people go to. I like to cook and bake so I’ll put up recipes, what I bought this week, beauty tips, products that I use and so forth.

Though her father is a billionaire, Wang has her own money as well. Celebrity Net Worth reports that she has $10 million, but there’s no telling if the money came from daddy, her recent fame, or her real estate ventures … It’s probably a mix of all three.

5. Dorothy May Get Confronted By Her Friends This Season

In the above clip, it appears that Dorothy is getting confronted about “making rude comments” to all her friends. Is Dorothy in hot water with the group?

No worries, if her fellow cast-mates don’t work out as buds, she always has the Hilton sisters …