#ImHappyBecause Emmy still looks so good after all these years pic.twitter.com/GAdRemKeQk

Generally, the awards show broadcasts on a Sunday, but Monday was chosen this year so that the show did not conflict with the 2014 MTV Video Music Awards.

Be sure to tune in and get your predictions ready for the big event. 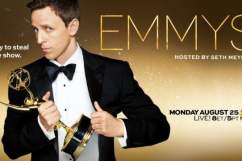 Read More
Celebrities, Emmys 2014, TV
The 2014 Emmy Awards are coming up. Check in here for the date and time of the big event.