Gwyneth Paltrow may be in a Glee-ful coupling. The actress was spotted with the co-creator of the show, Brad Falchuk, in late July.

Could this be just a summer fling or a match made in Hollywood?

Here’s what we know about their connection.

1. They Went to Dinner

Us Weekly exclusively reported that they were on a dinner date at East Borough, a Vietnamese restaurant, in L.A. in late July.

Paltrow appeared on multiple episodes of the show as substitute teacher Holly Holliday. Watch the clip above, taken from the 100th episode, where she sings Pharrell’s “Happy.”

Her character, Holly, was sexually forward and said, “”I just don’t think it’s that realistic. It’s like saying vegetarianism is an option for lions,” when talking about teen celibacy.

Kristin Chenoweth and Gwyneth Paltrow on the Glee set together I LOVE THIS @KChenoweth @GwynethPaltrow pic.twitter.com/qEUH9IRX12

3. She Recently Split With Her Husband

She was married to Coldplay frontman Chris Martin after 10 years of marriage and two children together.

On March 25, she announced their split by posting this statement on her website, goop:

He’s a producer and a writer known for hit shows like Glee, Nip/Tuck, and American Horror Story.

5. They Both Have Jewish Backgrounds

Falchuk’s mother, Nancy, is the national president of the American Jewish women’s organization Hadassah.
His religion can be seen on the show, as many of the leads are Jewish. Beliefnet even wrote a piece titled, “Glee’s Jewish characters.” 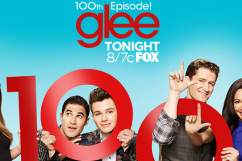