Although her character on Girls is at a crossroads in her personal life, leaving town in Season 4, in real life, Lena Dunham is in a stable and loving relationship.

Tonight, as the actress celebrates her 2014 Emmy Award nod, her boyfriend, musician Jack Antonoff, will surely be supporting his girlfriend.

Here’s what you need to know about the man behind the Girl.

Antonoff is the guitarist for the band Fun, whose 2011 anthem “We Are Young” brought them worldwide fame, and spent seven weeks in the No. 1 slot on Billboard’s Hot 100.

He toured with bandmates Nate Ruess and Andrew Dost for almost three years, promoting their breakthrough album Some Nights.

They met in April of 2012, the same month that Girls debuted.

Dunham told the Huffington Post about their first date:

I remember talking with him on our first date and him being like, ‘God, all the articles about your nudity on the show are such bullshit,'” she continues. “It’s funny, ’cause in some ways that’s the conversation we still have when I’m upset [about stuff I read].

In the video above, he talks about how Lena yells, “Go,” in the background of one of his songs.

3. He Was Scarlett’s High School Sweetheart

Antonoff dated Scarlett Johansson when they were both students at the Professional Children’s School in New York City.

When they were both 17, they dated for a year.

He told GQ about his high school experience:

4. His Sister’s a Famous Designer

His sister, Rachel, is a New York-based designer.

Watch the interview above with the famous siblings and Teen Vogue.

Jack told the New York Times, ““Everything I do, my first thought is, I wonder if Rachel will think it’s cool. In that sense, we really do everything together.”

When he put out an album, Strange Desire, under the name Bleachers, there was speculation that he’d left Fun.

“As soon as I released the single, people were like, “Are you leaving Fun?” I was like, “No!”, I have a lot of work and I want to put it out there,” he told GQ.

Dunham actually directed his music video for his single “I Wanna Get Better,” shown above.

“She’s a great director. I didn’t have to worry about it because I knew she would handle it, whereas sometimes with other videos you’re scared like, ‘Is this going to be right?’ … I, just for once in my life, got to do nothing,” he told the Salt Lake Tribune. 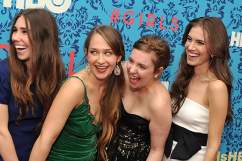 ‘Girls’ Season 4 on HBO: 5 Fast Facts You Need to Know